Home / International / George Floyd killing: Protests spread to Europe after six days of unrest in US 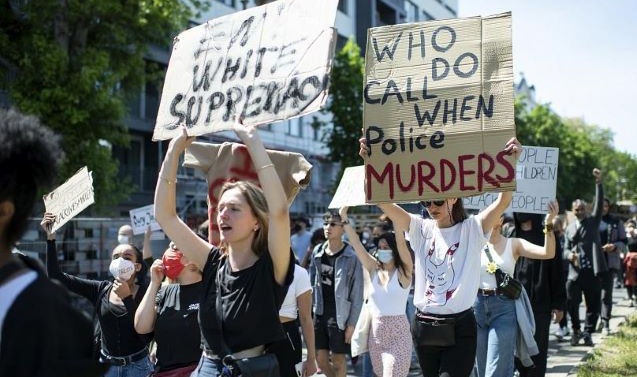 Demonstrations against racism took place in cities around the world including London, Berlin, Montreal and Auckland after the death of black American, George Floyd.

The 46-year-old died after a police officer was filmed with his knee on the neck of Floyd, who complained he couldn’t breathe.

The incident in Minneapolis on May 25 has sparked violent protests in the US, which have been described as the worst unrest in decades.

One police officer, Derek Chauvin, has been charged with third-degree murder and manslaughter. Chauvin and three other officers were fired.

Thousands joined a protest in London on Sunday and a silent vigil was held in front of the US embassy next to Brandenburg Gate on Monday. US citizens present criticised Donald Trump’s reaction to the killing as well as systemic racism in the country.

Protests were particularly chaotic in US cities where demonstrators have ignored curfews and calls to stay away — including in Minneapolis, the city where Floyd died.

Protests spread to major cities from New York to Los Angeles — but also to smaller cities such as Eugene, Oregon and Richmond, Virginia.

Protesters hurled rocks and Molotov cocktails at police in Philadelphia and seven police officers in Boston were hospitalised. Police used tear gas and rubber bullets against protesters in several US cities.

Police officers and National Guard soldiers in Kentucky killed a man early Monday. Police said they were returning fire after someone in a group shot them first.

Meanwhile, a number of fires were set near the White House as protests escalated in Washington DC on Sunday night. The New York Times reported that President Donald Trump had been rushed to an underground bunker in the White House, used in the past during terror attacks.

Several state governors called in the country’s National Guard to try to quell the uprising, with clashes continuing over the weekend. More than 4,000 people have been arrested during the protests since the day George Floyd was killed, according to an Associated Press tally.

There have been numerous reports of police brutality against unarmed protesters and journalists covering the protests. Two police officers were fired and three others placed on desk duty over the use of excessive force during one incident, Atlanta’s mayor said on Sunday.

Police and protesters clashed in city centres, police vehicles were set on fire, and property and businesses damaged amid widespread rioting and looting.

Demonstrations earlier on Saturday had again been largely peaceful, with tributes to George Floyd and chants of “we can’t breathe” which is becoming a mantra to the plight of many black Americans, angry at police brutality, racial discrimination and inequality.

President Trump acknowledged the “horror, anger and grief” felt by many over Floyd’s death, denouncing “looters and anarchists” for the violence. He blamed the Democrat mayor of Minneapolis for failing to control the protests.__EuroNews