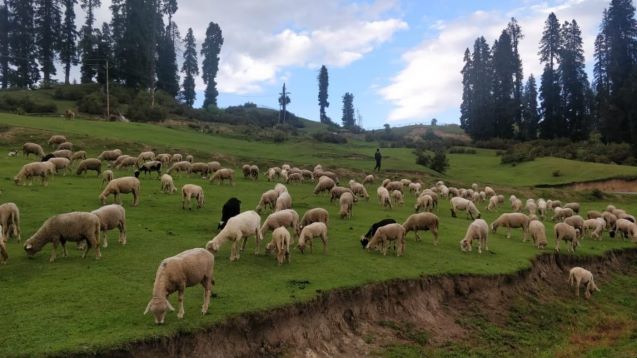 SRINAGAR: The department of sheep husbandry has declined army’s offer to purchase a huge chunk of land in Pattan area of north Kashmir’s Baramulla district, days after a letter of interest was shot by the former to the government.

“We have informed army that we’re not interested to sell our land to them. I have conveyed this decision to their officers verbally. On Monday, I will send a written communication to them since Saturday and Sunday are holidays,” Director Sheep Husbandry, Kashmir Dr. Abdul Salam Mir told Kashmir Observer Saturday.

Earlier, in an official communication on May 26, the army’s 19 infantry division ordinance unit had expressed its desire to purchase 129 Kanals of land in Pattan area belonging to the Sheep Husbandry department.

“Some troops of this unit are temporarily stationed in your land at Kreri high ground, near Tapperwari village. It is requested to inform whether you wish to sell your above mentioned land to the Indian army,” read the letter addressed to the Director Jammu and Kashmir Animal and Sheep Husbandry Department.

The letter issued and signed by Major Quartermaster for Commanding Officer had sought reply from the department by May 30. 2020.

Director Sheep Husbandry also confirmed to have received a letter of interest by the army. He also said the land belongs to the department and the locals were no shareholders to it.

“We can’t sell this land. We need it to meet our demands. We sow seeds and produce fodder which we sell to the farms,” he said, adding “This land entirely belongs to our department. It is registered in revenue records,” he added.

Meanwhile, the locals in Tapper Waripora have grown anxious after hearing about the news that army was purchasing land in the area. The locals, a senior Panchayat member said believe that army wants to purchase their land which has been under their occupation after the events of 1947.

“Around ten families visited me since morning and refused to sell their land to the army. Even 3 kanals of our ancestral land are also under army’s occupation. The locals have no idea which land army wants to purchase,” Sarpanch Takiya Tapper Farooq Ahmad told Kashmir Observer.

Army, he said had taken on lease thousands of kanals of land from the farmers in the area following the events of 1947. He said the landowners receive Rs 500-1000 per kanal rent from the army.

“On Monday, I will meet the officials and try to gather details of the land army wants to buy. The willingness of locals is the most important part of any deal,” he added.

In January 2018, the former Chief Minister of J&K Mehbooba Mufti had informed the assembly that over 4.30 lakh kanals of land, 51116 kanals in Jammu and 379817 in Kashmir, were under unauthorized occupation of army and other central forces, New Indian Express had reported.

Giving a detailed break-up, Mehbooba had said that in north Kashmir’s Baramulla district 34598 kanals of land was under unauthorised occupation of army and other security forces, followed by Budgam with 33478 kanals of land, Pulwama 15276.4 kanals, Kupwara 12115 kanals, Anantnag 7829 kanals, Bandipora 5782.5 kanals, Srinagar 4951 kanals, Shopian 4803.15 and Ganderbal 2172.17 kanals, the report added.