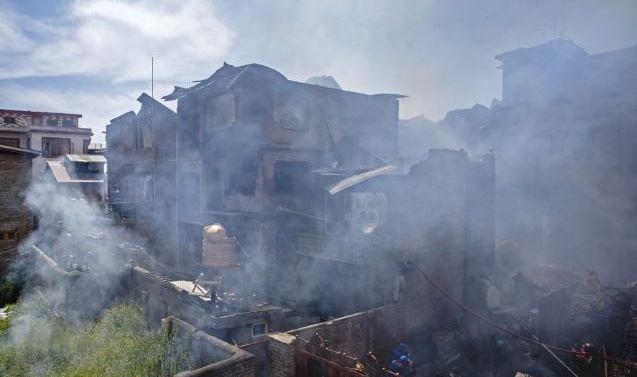 Srinagar- Two militants including Junaid Sehrai, son of separatist conglomerate Tehreek-e-Hurriyat’s chairman Ashraf Sehrai were killed and three forces personnel, including two from SOG, injured in the ongoing encounter between militants and government forces in Nawakadal area of Downtown Srinagar. The encounter brokeout on the intervening night of May 18-19.

A senior Police officer said that two Hizbul Mujahideen militants have been killed in an ongoing encounter, the identity of militants is yet to be ascertained as operation is still underway.

The firing resumed this morning in Kani Mazar locality of Nawa Kadal after a lull of five hours, reports from the area said.

There was a lull in the firing from 2:30 AM to 9 this morning. “Contact was established again with the militants at 9 AM,” police said.

A residential structure has also been damaged in the exchange of fire.The smoke could be seen billowing from a house in the area from a distance, eyewitnesses said.

Meanwhile mobile internet and cellphone services, except on BSNL postpaid, have been snapped in the capital city.

This is the first encounter in Srinagar city after August 5, 2019.__Kashmir Observer