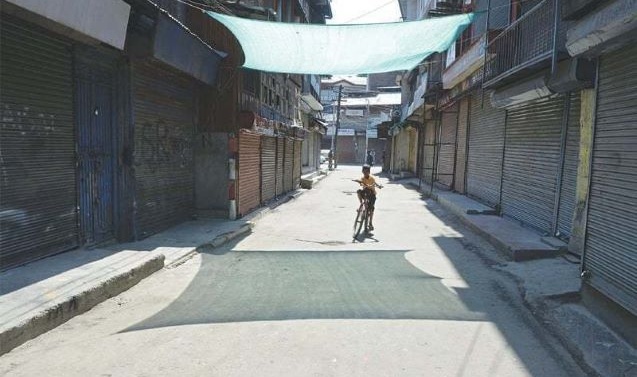 Azad Jammu and Kashmir (AJK) government on Sunday announced the withdrawal of relaxations in lockdown measures from Tuesday following a “dangerous” surge in the number of Covid-19 cases in the territory.

“In view of the tendency of rapid outbreak of Covid-19 and increase of patients to a dangerous level, the government is suspending relaxations in the lockdown from Monday-Tuesday midnight,” a notification issued by the AJK home department reads.

“There will be complete lockdown that had been imposed earlier on March 23 under Epidemic Diseases Act, 1958,” the notification added.

The AJK government had imposed a complete lockdown on March 23, during which, only pharmacies and grocery stores were allowed to open for specified hours under standard operating procedures (SOPs).

After intense pressure from the business community as well as under an assumption that the pandemic had not hit the region as badly as it had affected other parts of the country, the lockdown was eventually relaxed on April 24.

Sources told Dawn.com that the administration was “baffled” at the rapid increase in the number of Covid-19 cases in the region after the introduction of stringent measures in urban areas to enforce precautionary measures such as social distancing.

According to Dr Mustafa Bashir Abbasi, cabinet member and spokesperson for the AJK government, there had been 60 confirmed cases of coronavirus in AJK between March 26 and April 30 but the number had surged to 112 by May 17.

In Muzaffarabad, where there were only six patients until May 1, the number had risen to 34, which was “more than alarming,” he said.

“What’s worrisome is the emergence of many of these cases during random sampling in different neighbourhoods of the state capital,” Abbasi said, adding that two patients were in critical condition.

“The attitude of the majority of shopkeepers and visitors left little doubt in the fact that they were either totally oblivious to the danger or had been taking the SOPs too lightly,” Abbasi lamented.

In a statement, AJK Prime Minister Raja Farooq Haider explained that his government was compelled to withdraw relaxations in the interest of public safety.

“I had been constantly calling upon people to avoid unnecessary travel, visits to market places and any other steps that violate social distancing,” Haider said.

“And after detection of several positive cases during random sampling [in Muzaffarabad] most of my concerns have come true,” he added.

Haider said that no business or festival is worth a human life and requested people to stay indoors and celebrate the upcoming festivities of Eid with simplicity.

“Heavens are not going to fall if we celebrate Eidul Fitr this year with simplicity and modesty. Instead of roaming the markets at the peril of our lives as well as those of our loved ones, it’s far better to stay indoors and seek blessings and forgiveness from the Almighty,” he said.

The AJK prime minister also announced that interprovincial and intra-AJK transport will continue to remain suspended after he held a meeting with the transporters earlier in the day.

“I have conveyed a loud and clear message to my administration that anyone violating the conditions of lockdown should not be spared, come what may,” Haider concluded.

Prime Minister Imran Khan had earlier this month announced the lifting of the countrywide lockdown in phases from May 9 by reopening all construction-related industries and shopping centres for five days a week from Fajr (early morning) till 5pm and outpatient departments (OPDs) in hospitals.

Soon after, the governments of Punjab, Sindh, Khyber Pakhtunkhwa and Balochistan also announced the partial easing of lockdown measures imposed to curb the spread of the novel coronavirus.__Dawn.com