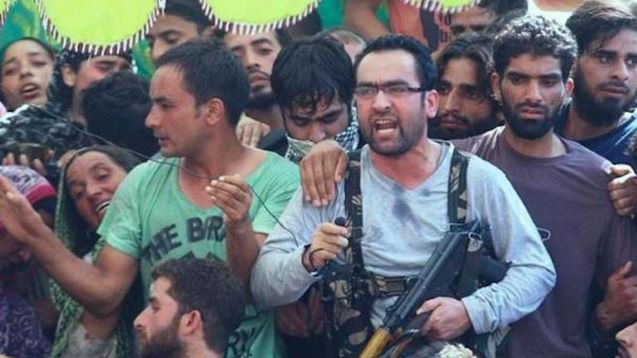 SRINAGAR: A top Hizbul Mujahideen commander Riyaz Ahmad Naikoo was on Wednesday killed in an encounter with armed forces in his home village in Pulwama district.

The Jammu and Kashmir authorities have already snapped cell phone and mobile internet services across Kashmir valley and clamped a curfew as a precautionary measure, in anticipation of possible protests, police said, adding that there are strict restrictions on the movement of people.

Naikoo, 35, was one of the most wanted militants in Kashmir and his death is a serious blow to Hizbul Mujahedeen.

Inspector General of Police Kashmir Vijay Kumar confirmed the killing of Naikoo and his associate in the gunfight. His associate who died with him has been identified as Adil Ahmad.

Naikoo, operational commander of the banned Hizbul Mujahideen, was trapped in Beighpora village in Pulwama, the officials said.

They added that Naikoo’s family has already been informed about it.

A police spokesperson said earlier in the morning that a top militant commander along with an accomplice was trapped in an encounter but did not reveal his identity.

Later in the day, officials disclosed that the man in their sights was Naikoo, who carried a reward of Rs 12 lakh. They had been looking for him for eight years.

Naikoo became the de facto chief of the militant group after the death of Burhan Wani, the poster boy of militancy in the Valley, in July 2016.

The encounter, which started late on Tuesday, 5 May, night went on till Wednesday afternoon.

One report said Riyaz Naikoo had come to his village home when the government forces including the Rashtriya Rifles (RR), Central Reserve Police Force (CRPF) and the Special Operations Group (SOG) of the local police, moved in quickly to seal all entry and exit points of the village.

A Humble Village Boy To a Dreaded Militant

Naikoo was the last major name among militants active in South Kashmir. IGP Kashmir Vijay Kumar once said, that, “If we are able to kill Riyaz Naikoo, Hizb would almost be wiped out from South Kashmir”.

Naikoo had replaced Sabzar Ahmad Bhat who was killed by army in Tral in 2017 as groups commander. Sabzar had, in turn, replaced Burhan Wani as the operational chief in Kashmir.

Naikoo was considered a soft face of the Hizb in Kashmir. In 2018, after militant attacks in South Kashmir, Naikoo had reassured Amarnath Yatris that the pilgrims were guests of Kashmir and they need not worry about their safety. He had also asked for the repatriation of Pandits to Kashmir, assuring them safety and saying that the militants were not against them.

Naikoo was born to Asadullah and Zeba in Beighpora village of Awantipora tehsil in district Pulwama in April 1985. The second among a sister and three brothers, Naikoo studied at the government school in the neighbouring village of Gulzarpora, and then at the Higher Secondary School in Noorpora, according to a report by Azaan Javed in Huffpost India.

“Riyaz wanted to become an engineer but he decided to pursue his graduation in science with Mathematics as his major subject,” according to the Huffpost report. “In 12th standard he scored 464 marks out of 600,” according to his father Asadullah. “He was always the silent type and was even called upon by village elders to mitigate local disputes. After his graduation he began teaching Maths at a private school.

According to the Huffpost report “Naikoo’s parents spoke of Riyaz in the past tense, as if already reconciled to the likelihood that their son would one day die in gun battle.

In 2010, Tufail Ahmad Mattoo was killed when a tear gas shell—fired by policemen to quell a protest against the fake encounter of three civilians in Machil—struck him as he played cricket in Srinagar’s Gani memorial stadium.

Mattoo’s death triggered a fresh cycle of unrest; scores of youth were arrested by the police and Naikoo was one of them. When he was released from prison in 2012, something had changed inside the young maths teacher, Huffiest report såid.On 21 May 2012 Naikoo disappeared from home. On 6 June, the police informed Asadullah that his son had joined the Hizbul Mujahideen.__Kashmir Observer