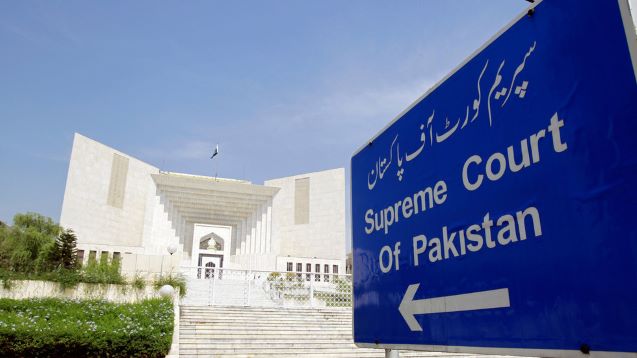 ISLAMABAD: The federal government has approached the Supreme Court (SC) to seek permission for setting up of a caretaker government for holding upcoming general election in Gilgit-Baltistan (G-B).

“It is respectfully prayed that the federal government may please be allowed necessary amendments in the government of Gilgit-Baltistan Order 2018 for the caretaker government and conduct of elections for Gilgit-Baltistan Assembly, inter alia to adopt the Election Act 2017, the rules and regulations made thereunder and to do all that is necessary to continue democratic political process/regime in the area in the interest of justice,” said the civil miscellaneous application (CMA) submitted in the top court.

Delineating the background of the case, the application said that in June 2018, the president of Pakistan had approved the promulgation of “the government of Gilgit-Baltistan Order 2018, which was challenged in the Supreme Appellate Court G-B, which on July 13, 2018 set aside the same Order 2018 and restored the Gilgit-Baltistan (Empowerment and Self Governance Order 2009). However, the judgment was suspended by the SC.

On December 3, 2018, the apex court ordered the federal government to prepare a fresh draft for the government of G-B on the basis of recommendations of Sartaj Aziz Committee.

A draft of Gilgit-Baltistan Reforms 2019 was submitted in the apex court, which on January 19 passed a detailed judgment.

In compliance of the apex court verdict, the “Gilgit-Baltistan Governance Reforms 2019” was placed before the federal cabinet.

The people and government of G-B expressed discontentment over it to some extent.

The residents of G-B demanded that instead of governing G-B through presidential order, the area should be governed by Act of Parliament of Pakistan.

The government of G-B observed that their apprehensions were not addressed.

Therefore, a meeting of all stakeholders on February 16, 2019 was held and a consensus was reached that the G-B Governance Reforms 2019 would be enacted through Act of Parliament as per aspirations of the people of G-B.

Accordingly, some amendments in proposed G-B Reforms Order 2019 were made in consultation with all stakeholders, said the application.

It was also stated that during the meetings with the stakeholders, it was proposed that a bill would be tabled in the Parliament soon.

The copy of the bill has also been shared with the Supreme Court.

However, the process may take some time in view of the coronavirus pandemic.

The government has informed the top court that the five-year term of the incumbent G-B government would expire in June and that there was an urgency to provide legal mechanism to the whole process for holding of election including setting up of a caretaker government in G-B.

It has been stated that subject “Election in G-B” was not clearly enumerated in the government of Gilgit-Baltistan Order 2018 or in Gilgit-Baltistan Reforms 2019, which needed to be rectified.

The current G-B government would complete its five-year tenure in the last week of June and next general elections in region would become due within 60 days.

The government said that not adopting the Elections Act 2017 and Elections Rules 2017 in G-B may delay the preparation of fresh computerised electoral rolls and election process of G-B Assembly.

Likewise, it has been stated that there is no provision in order 2018 for setting up caretaker government which is against the spirit of transparency and constitution.

Keeping in view the importance of the issue, Chief Justice Gulzar Ahmed has constituted a seven-judge larger bench headed by him to take up the government’s application on Tuesday.

Attorney General for Pakistan Khalid Javed Khan will appear on behalf of the federal government before the court.__Tribune.com