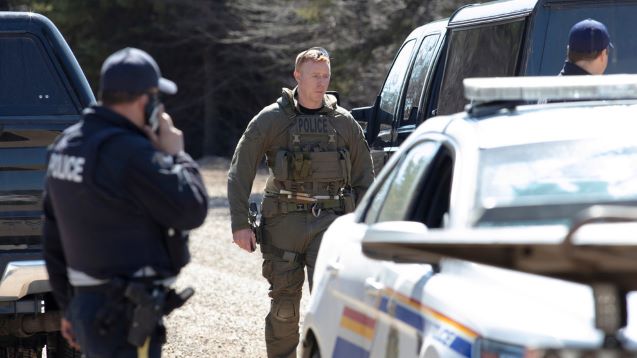 The worst mass shooting in Canada’s history started with the suspect assaulting his girlfriend, and this may have been the “catalyst” for the 22 grisly slayings that followed, police said Friday.

Royal Canadian Mounted Police (RCMP) Superintendant Darren Campbell, at a news conference describing the 13-hour manhunt for the shooter, said his motives are still under investigation.

But the suspect’s beating of his girlfriend, who managed to escape and hide in nearby woods and later informed police that her attacker wore a patrolman’s uniform and drove a mock squad car, “could very well have been the catalyst to start the chain of events.”

“It was a significant assault,” Campbell noted, suggesting also that her escape may have enraged the shooter, identified as 51-year-old denturist Gabriel Wortman.

Police previously described the girlfriend simply as “a key witness” who helped them identify the armed suspect after she emerged from hiding Sunday morning, about nine hours into the shooting and arson spree.

Thirteen victims had been identified by then in the quiet and sparsely populated Nova Scotia seaside community of Portapique where police set up a four-square kilometre (1.5 square mile) perimeter to try to contain the suspect.

Overnight, the shooter may have fled the area by driving through a field or, disguised as an RCMP officer, slipped past barricades, Campbell said.

“I can’t imagine any more horrific set of circumstances when you’re trying to search for someone that looks like you,” Campbell said.

This “obviously complicated things” and gave the suspect an “advantage” over police, the public and “every person that he encountered through the course of his rampage.”

Authorities noted also that they learned of three “plated” Ford Taurus cars owned by the suspect — the same make and model as RCMP squad cars — but were not initially aware of a fourth made to look like a squad car and driven in the attacks.

Their investigation has so far uncovered where Wortman purchased the lightbar for the vehicle and may have sourced decals.

His guns, police said, were purchased in Canada and the United States.

He also took the sidearm and magazines off a veteran policewoman after killing her in a confrontation shortly before he was gunned down by a tactical officer who caught up with him at a gas station near Halifax.

“While he was at the gas pumps, one of our tactical resources came to the gas station to refuel their vehicle,” he said.

“When the officer exited the vehicle, there was an encounter and the gunman was shot and killed by police at 11:26 in the morning.”__Hindustan Times