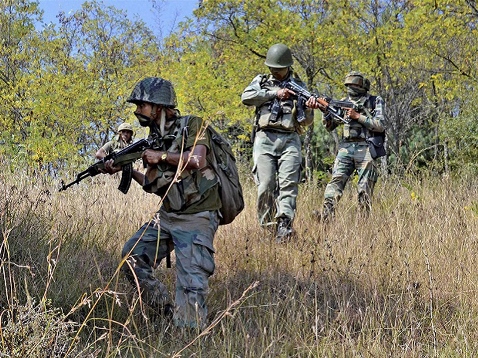 SRINAGAR: Five militants and as many soldiers, including a JCO from army’s elite para force, were killed on the day five of gunbattle raging in the woods of Kupwara district in north Kashmir.

Defence ministry spokesman Col Rajesh Kalia said that the slain militants were infiltrators and that the operation was still going on.

In a statement issued here, he confirmed the killing of three soldiers and injuries to several others. However news agency GNS quoting sources reported that two among the injured soldiers including a Junior Commissioned Officer (JCO) succumbed to injuries at army’s Badamibagh Base Hospital. The injured had been brought there from Kupwara earlier.

All the slain army soldiers as well as three other injured in the gunfight, report said, are mainly from elite para force.

Kalia said that three soldiers were killed—one of them on the spot while two others succumbed to critical injuries later on. Police sources said that bodies of the militants were so far not handed over by the army to police. “The army informed us that bodies could not be recovered so far due to difficult terrain and inclement weather,” a police officer said, according to the report.

On 4th day of the operation on Saturday evening, the army rushed elite para troops to Rangdoori, Gugaldara and Teen Behak area of Jumgund. Sources said that firing continued throughout the night, reaching at peak in the wee hours of Sunday.

The operation was launched initially by army’s 8 JAT after intercepting movement a group of militants on Wednesday.

Earlier four militants of Hizb-ul-Mujahideen were killed while an army soldier suffered injury in a gunfight that raged between forces and militants in Hardmanguri area in Damhal Hanjipora belt of South Kashmir’s Kulgam district. The gunfight broke in Kulgam district after a gap of 10 months.

An official identified the militants killed by forces in Kulgam gunfight as Ashraf Malik from Arwani Bijbehara, Aijaz Nayak from Chimmer Kulgam, Shahid Malik from Khul village and Waqar Ahmad from Chawalgam Kulgam.