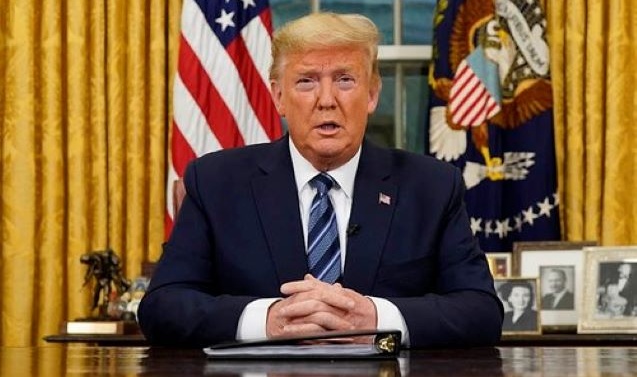 US authorities on Friday announced “voluntary” use of face masks in public as the number of fatalities went up to more than 7,100 with 1,480 in the last 24 hours.

The total of confirmed cases rose by 30,000 over the same period of time to go past the quarter million mark. America ended the day, as a result, with 278,000 confirmed cases and 7,141 fatalities, according to the Johns Hopkins University’s coronavirus tracker Saturday.

Washington DC, the national capital, has emerged as an area of “developing concern” along with the states of Colorado and Pennsylvania and the cities of Chicago in Illinois and Detroit in Michigan based on new cases and deaths, according to the White House coronavirus task force. New York, New Jersey, Michigan, Louisiana, Connecticut continue to report high incidence.

New York state remains the worst hit with 103,000 cases, a tenth of the world total of 1 million cases, and 2,935 deaths. New York City, which alone accounted for 1,867 deaths, is faced with an additional crisis of the shortage of medical supplies, and officials have warned of empty racks by this weekend.

Washington state, where the first reported coronavirus death in America was announced on February 29, and California have been able to slow the spread belying early fears, and are beginning to be cited on how to beat the deadly pathogen with rigorous and disciplined social distancing.

The Centers for Disease Control and Prevention (CDC), whose social-distancing guidelines have served as the template for the shutdown of all but a handful of US states, recommended Friday Americans should wear masks in public, as announced by President Donald Trump at the daily brief of the White House coronavirus task force, citing studies that show the “transmission from individuals without symptoms is playing a more significant role in the spread of the virus than previously understood”.

“In light of these studies, the CDC is advising the use of non-medical cloth face covering as an additional voluntary public health measure,” the president said, and added, infusing the new recommendation with his characteristic scepticism about the virus.,

“So it’s voluntary; you don’t have to do it. They suggested for a period of time. But this is voluntary.” And, he added, severely undermining the credibility of the move, “I don’t think I’m going to be doing it.”

President Trump’s reservations about the new recommendation are representative of his overall response to the outbreak from the start when he first sought to dismiss it as a hoax and then, as cases and bodybags piled up, portray it as a transient crisis. It proved to be neither and cost the country precious response time, according to his critics.

Pressed for his reasons for his personal aversion to the mask, the president said, “I just don’t want to be doing — I don’t know, somehow sitting in the Oval Office behind that beautiful Resolute Desk — the great Resolute Desk — I think wearing a face mask as I greet presidents, prime ministers, dictators, kings, queens, I don’t know. Somehow, I don’t see it for myself. I just — I just don’t.”

The president also addressed questions impact of the epidemic on the general election on November 3, when he will up up re-election. Asked if they be held as scheduled, he said, “The general election will happen on November 3.” But he dismissed suggestions of switching to mail-in voting in case social-distancing guidelines were still in place — “lot of people cheat with mail-in voting”.__Hindustan Times