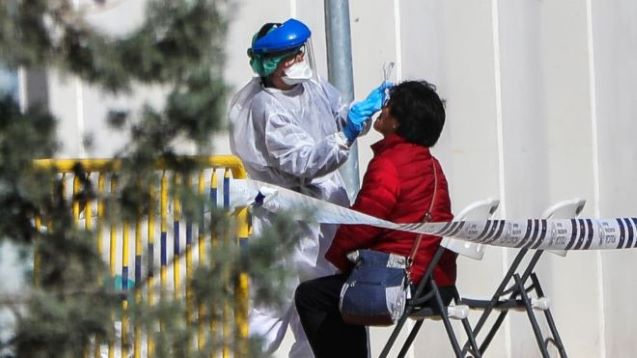 It could be six months before life returns to normal in the UK, a health chief in England warned on Sunday, as coronavirus cases continued to spread around the world forcing more countries to take action.

Italy, which has the world’s highest number of deaths, counted 756 more deaths in the previous 24 hours bringing its total death toll to 10,779.

In Russia, where the reported numbers had suggested the country was escaping the worst of the virus, the mayor of Moscow ordered a lockdown.

Spanish authorities announced on Sunday that a new record number of COVID-19 deaths had been observed in the country, with 838 fatalities.

The new tally narrowly beats the previous one-day record seen on Saturday and brings the total number of deaths in the country to 6,528. The total number of confirmed cases now stands at 78,797 – an increase of 6,549 in 24 hours.

And in the country with the highest number of confirmed cases in the world – the US – the government’s top infectious disease scientist said on Sunday the US could see more than 100,000 deaths and millions of coronavirus infections.

The number of fatalities around the world soared past 33,000 on Sunday, with Europe the hardest hit region.

With 319 new deaths due to COVID-19 on Saturday, France’s death toll crossed the 2,000 bar. Authorities also revealed that there are currently more than 4,200 people in intensive care in the country.

Prime Minister Edouard Philippe warned that “the first 15 days of April will be difficult, even more difficult than the 15 past ones”, as France prepares for a sharp increase in the number of COVID-19 cases according to projections.

“The fight has only begun”, Philippe said. The French health minister Olivier Véran added that the country wants to increase its intensive care bed capacity from 5,000 currently to 14,000.

British Prime Minister Boris Johnson warned on Sunday that “things will get worse before they get better” and that further restrictions may be imposed on citizens.

The British leader, who has been in self-isolation since Friday when he revealed that he had tested positive for the disease, stressed in a letter to be sent to every household in the country that confinement rules “must be observed” and that “police will issue fines” if they are broken.

His warning came just hours after the country announced that its death toll from the deadly virus had passed the grim 1,000 threshold while the number of confirmed cases stood at 17,089.

And in the UK’s daily briefing, the deputy chief medical officer Dr Jenny Harries said it could be at least six months before life returned to normal in the country, although she did add: “This is not to say we would be in complete lockdown for six months”. It emerged that there will be a review of the sitation every three weeks to see how things are progressing.

Across Europe, countries have reinforced measures to contain the spread of the deadly disease with Hungary and Ireland both introducing 15-day lockdown on Friday.

France and Belgium, already nearly two weeks into their own lockdowns, both extended their self-isolation policies by another two weeks on Friday, a day after Spain had announced its own extension.

Russia announced on Saturday it would completely close its borders due to the global COVID-19 pandemic.

In the UK, NHS England announced on Saturday that two new hospitals would be created in the coming days.

These two facilities in Birmingham and Manchester — both to be housed in conference centres —will each provide an initial 500 beds that could then be expanded by up to 2,000 beds.__EuroNews