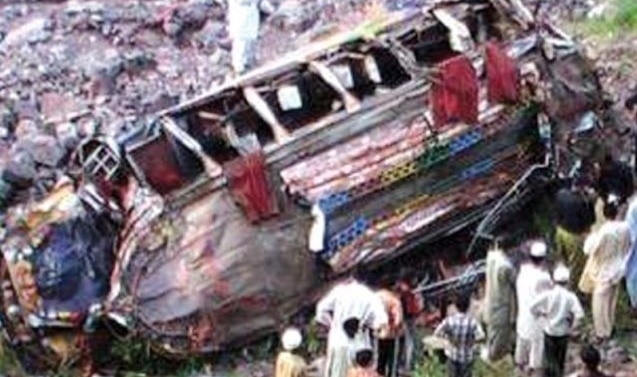 MUZAFFARABAD: At least nine people were killed and several others sustained injuries after a private coach carrying 24 passengers skidded off the road in Bagh District of Azad Jammu and Kashmir (AJK) on Sunday.

According to eye-witnesses, the accident occurred after the driver lost control his on the bus because of the slippery road in Arja town causing the vehicle to plunge into a deep ravine while marking a sharp turn, killing six people on the spot.

Thirteen passengers were shifted to a nearby hospital where three of them reportedly succumbed to their injuries, raising the death tally to nine.

AJK President Sardar Masood Khan expressed sorrow over the loss of precious lives and prayed for quick recovery of those injured in the accident.

Offering condolence to the families of those who lost their lives, he directed officials concerned to ensure the best possible treatment to the injured.

“Deeply distressed to know of a fatal road accident at Arja near Bagh in which many lives have been lost. My thoughts and prayers are with bereaved families. May Allah give them strength to bear this loss. I have directed officials to ensure the best possible treatment to injured,” President Masood tweeted.__Tribune.com