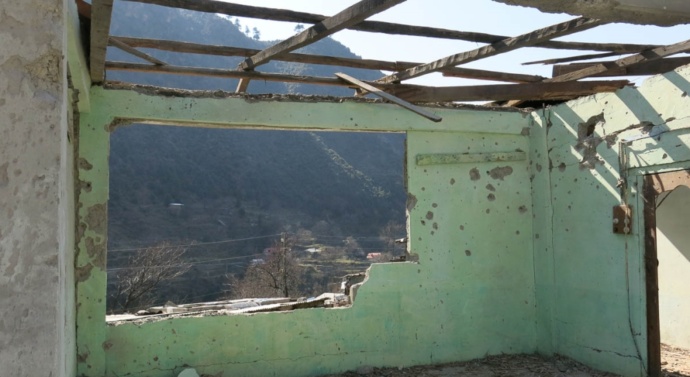 Residents of villages near the Line of Control say they are worried for their lives due to India-Pakistan tension.
Jura, Pakistan-administered Kashmir – Standing atop the rubble of his destroyed home in the village of Jura in Pakistan-administered Kashmir, Muhammad Siddiq Mir said he has spent the last few months fearing he could be killed any moment.
On Sunday, intense shelling by Indian forces hit this village which is located just four kilometres (2.5 miles) from the Line of Control (LoC), the de facto border that divides Kashmir.
Mir’s house, as well as those of his brother and a cousin, were completely destroyed. The shells tore through the roof, destroyed walls and left the structures damaged beyond repair.
“What can we do? We pray to Allah to save us from this situation,” Mir said. “My father built this house with his own hands. That’s what gives me the most grief.”
Mir has no money to rebuild his house. Together with the 15 family members whose houses were destroyed, Mir is now living in a single room in a relative’s house.
Their plight illustrates the human cost of a spike in tensions between India and Pakistan since last year over the disputed territory of Kashmir, which both countries claim in full but administer separate portions of.
Since 2019, at least 60 civilians have been killed and more than 280 wounded due to Indian shelling into Pakistan-administered Kashmir, according to Pakistani government data, which also revealed that the death toll rose by 114 percent compared with the year before.
Several civilians have also been killed in Indian-administered Kashmir by Pakistani shelling, although the government did not share official data on those attacks.
Conflict at the LoC spiked in February 2019 following a suicide attack that killed at least 40 Indian security forces in the Indian-administered town of Pulwama. India responded by increasing shelling across the LoC and then carried out air raids on Pakistan’s Khyber Pakhtunkhwa province on February 26.
A day later, Pakistan retaliated by air raids of its own, shooting down an Indian fighter jet as the nuclear-armed neighbours came to the brink of all-out war.
Jaba, a remote village located about 85km north of the Pakistani capital Islamabad and about 10km inside the boundary between Pakistan-administered Kashmir and Pakistan’s Khyber Pakhtunkhwa province, was at the centre of a potential nuclear conflict last year.
A year on from the air attack, on a sunny winter’s day, the village’s adult residents were all out tending to their fields or gathering firewood in the mountainside hamlet.
Two craters from where the Indian bombs landed are still visible, surrounded by rocky rubble.
“Nothing grows there any more,” said nine-year-old Mubasher Mianwal, on whose family’s farmland one of the bombs landed. “We used to grow wheat and grass [for fodder] there.”
Further up the mountain lies the apparent target of the attack: A religious school run by the Jaish-e-Muhammad (JeM) armed group.
Last year, India claimed it had killed “a very large number of JeM terrorists, trainers, senior commanders and groups of jihadis” at the school. A visit to the area a day after the attacks found little evidence of the claimed casualties, although Al Jazeera was not allowed to get to the school itself.
On Monday, a caretaker at the seminary told Al Jazeera the school was shut down six months ago, with the 400 students relocated to other institutes.
“They were concerned that there could be another strike here,” he said, speaking on condition of anonymity.
Pakistan’s military has claimed access to the school is open for journalists, and carried out a guided tour for international media in April 2019.
On Monday, however, Al Jazeera was turned away at the gate, with the caretaker citing the country’s Inter-Services Intelligence (ISI) agency as having barred access for reporters.