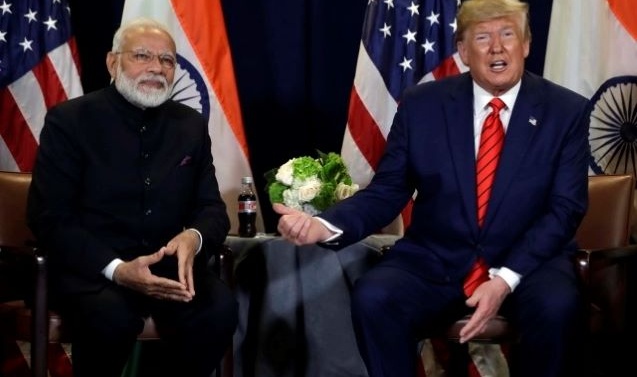 SRINAGAR – The United States President Donald Trump is expected to raise Kashmir issue with Prime Minister Narendra Modi during his two-day visit to India on February 24.

“I think what you’ll hear from the President is very much encouraging a reduction in tensions between India and Pakistan, encouraging the two countries to engage in bilateral dialogue with each other to resolve their differences,” a senior administration official said in Washington, when asked whether Trump would offer to mediate on the Kashmir issue again during his upcoming maiden visit to India.

Trump had last month again offered to help resolve the dispute between India and Pakistan, saying that the US was watching the developments between the two countries over Kashmir “very closely”.

Although Trump offered to mediate on the Kashmir issue in the past, New Delhi has told Washington that it is a bilateral matter between India and Pakistan and there is no scope for any third-party mediation.

“We continue to believe a core foundation of any successful dialogue between the two is based on continued momentum in Pakistan’s efforts to crack down on terrorist extremists on its territory. We continue to look for that. I think the President will urge both countries to seek to maintain peace and stability along the line of control and refrain from actions or statements that could increase tensions in the region,” the official said.

On Thursday, Pakistan expressed hope that the US President will take “some concrete practical steps” on his offer of mediation on Kashmir during his two-day visit.

At the weekly media briefing in Islamabad, Foreign Office Spokesperson Aisha Farooqui hoped the offer of mediation expressed by President Trump “will be taken forward through some concrete practical steps.”

A report in the English daily The Hindu added that the US President is also expected to raise U.S.’s concerns around the Citizenship Amendment Act (CAA) and National Register of Citizens (NRC) with PM Modi.

“The administration is concerned about these issues and that Mr. Trump will talk about these issues with Prime Minister Modi. Particularly, Mr Trump is expected to raise the “religious freedom issue” which is extremely important to the current U.S. administration as well as discuss shared traditions of democracy and religious freedom both in public remarks and certainly in private,” the official said in response to a question.

Responding to a question on the Afghanistan peace process, the official said the US would just encourage India, as it does with regional countries, to do whatever it can to support this peace process so that it can be successful and can potentially end 19 years of military, diplomatic, economic engagement.__Kashmir Observer