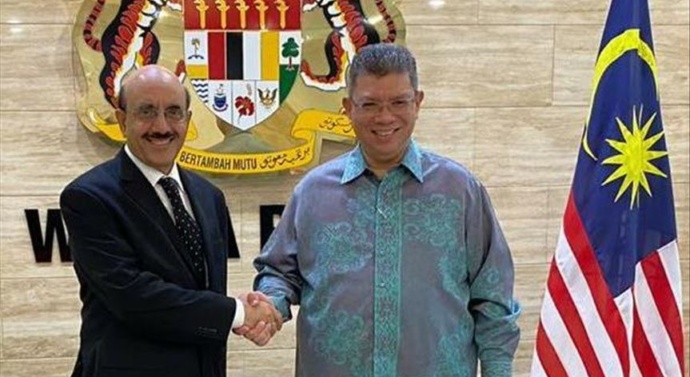 Malaysia is a key backer of Kashmiris, the president of Pakistani-administered Jammu and Kashmir said during his tour of Malaysia.
Sardar Masood Khan said the Southeast Asian country under its current Prime Minister Mahathir Mohamad “fully backs” Kashmir’s struggle.
“To crush the will of the Kashmiris seems to be a part of a global pattern. The response, therefore, should also be at the global level,” Khan told Malaysian parliamentary groups.
In a statement, Khan asked for Malaysia’s “guidance” to resolve the Jammu and Kashmir dispute through peaceful and diplomatic means, in accordance with UN Security Council resolutions “as the starting point of any negotiations on the issue.”
“People of Pakistan and Jammu and Kashmir are keen to learn from the experience of ASEAN [Association of Southeast Asian Nations] which had invested time, energy and political will in confidence-building measures and conflict resolution mechanisms to resolve amicably the association’s internal problems and its issues with neighboring countries,” he said.
He thanked Mahathir for his support on the Kashmir issue and his call for the implementation of UN Security Council resolutions.
During his visit, Khan held meetings with top Malaysian officials, and said that Kashmiris wanted the right to self-determination recognized and pledged to them by the UN Security Council.
“They [Kashmiris] do not want a confrontation or war or endless strife,” he said, adding: “I salute Malaysia for not yielding to immense Indian pressure to retract its position on Kashmir.”
Mahathir in his UN speech last year had criticized India for “invading and occupying Jammu and Kashmir,” after which New Delhi imposed restrictions on palm oil imports from Malaysia.
Khan underlined that Pakistani-administered Kashmir, also known as Azad Jammu and Kashmir, was “keen to receive, facilitate and host” Malaysian tourists.
He said Azad Kashmir and Malaysia could collaborate in the sectors of precious and semi-precious stone mining, halal food, small and medium-sized enterprises and trade.
Malaysian telecommunications firms could also help in building telecom infrastructures in Azad Kashmir, Khan said.
“Azad Kashmir is also keen to attract Malaysian investment in industrial and agricultural sectors and would promote exchanges of faculty and students of higher learning institutions,” he said.