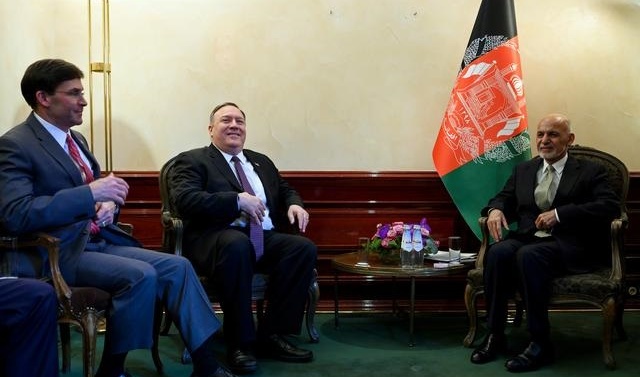 MUNICH/WASHINGTON – The United States has reached agreement with the Taliban on a weeklong reduction of violence that could lead to U.S. troop withdrawal from Afghanistan, a senior administration official said on Friday, while cautioning that Taliban needed to honor commitments for the accord to stick.
The announcement followed protracted negotiations in the Qatari capital Doha between the United States and the Taliban and a meeting between U.S. Secretary of State Mike Pompeo, Defense Secretary Mark Esper and Afghan President Ashraf Ghani during the Munich Security Conference.
A deeper agreement paving the way for a major U.S. troop withdrawal from Afghanistan could be a political boost for U.S. President Donald Trump, who has repeatedly promised to stop “endless wars” as he seeks re-election in November.
“It was violence that derailed the signing of the agreement in September. Now we have an agreement on the reduction of violence. And, should the Talibs implement what they’ve committed to doing, we will move forward with the agreement,” the senior administration official told reporters in Munich.
He added that the agreement was very specific and covered all Afghan forces, saying the U.S. military would be monitoring violence levels to verify whether or not the Taliban was honoring it.
“And our commitment, in terms of reduction of forces which is both conditions based and in phases is very much tied to delivery on the commitments that they have made, and will be,” the official said.
There are about 13,000 U.S. troops as well as thousands of other NATO personnel in Afghanistan, 18 years after a U.S.-led coalition invaded the country following the Sept. 11, 2001 al Qaeda attacks on the United States.
The United States is aiming to cut troop numbers to about 9,000, a Western diplomat told Reuters earlier this week.
Doha has been the venue for talks between the warring sides since 2018 even as fighting has continued across the country, killing hundreds of civilians and soldiers as the Taliban have expanded their territorial control.
Last month the Special Inspector General for Afghanistan Reconstruction, a U.S. government agency, assessed that there had been a record-high number of attacks by the Taliban and other anti-government forces in the last three months of 2019.
The Taliban stages near-daily attacks and though they are negotiating with U.S. envoy Zalmay Khalilzad, the armed group refuses to talk directly to Ghani’s government, calling it a “puppet” of the West.
Once the reduction of violence holds within the seven-day period, the talks would then expand into the next phase, dubbed the inter-Afghan dialogue, involving all parties.
“We’d like to see the Afghan government select a delegation that could go to negotiations. It should be an inclusive delegation that by the government. And then ceasefire comprehensive and permanent ceasefire that ends the Afghan war which will be the one of the first topics of the of the negotiations,” the official said.
He added, while the seven-day clock had not yet begun, he hoped it would “very