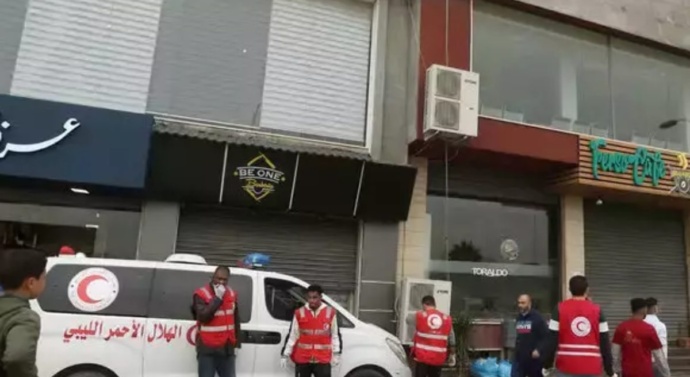 BERLIN: European Union officials are seeking support from member states to have naval ships enforce the UN arms embargo against Libya, according to a document obtained by The Associated Press on Friday.
The confidential proposal from the EU’s diplomatic service suggests the bloc’s dormant anti-migrant smuggling mission, known as Operation Sophia, should be renamed “Operation EU Active Surveillance.”
The proposal, circulated ahead of a meeting of EU foreign ministers next Monday, urges member states to agree on whether gathering information on and upholding the UN embargo should become the naval mission’s “core task,” while monitoring people smuggling would become a “supporting task” carried out from the air.
It goes beyond the agreement by EU countries last month to refocus the mission on the arms embargo by stressing the need to “deploy naval assets in the relevant zone” of its area of operations.
Currently, the EU naval mission Operation Sophia isn’t deploying ships amid disagreement among member states over how to treat migrants picked up from unseaworthy ships.
World powers agreed at a conference in Berlin last month to respect the arms embargo against Libya, but in practice, weapons have continued to flow to the two warring factions in the country.
Since the 2011 ouster and subsequent death of dictator Moammar Gadhafi, Libya has sunk further into chaos and turmoil. It is currently divided between a UN-supported government, based in the capital, Tripoli, headed by Prime Minister Fayez Sarraj and supported by an array of militias, and an administration based in the country’s east, supported by Gen Khalifa Hifter.
Hifter and his self-styled Libyan army have been waging an offensive to capture Tripoli since last April. On Thursday, Hifter’s forces indiscriminately shelled residential neighborhoods around Tripoli, killing one woman and wounding at least four civilians.
The renewed clashes came just hours after the United Nations Security Council endorsed a 55-point road map for ending the war that demanded foreign backers of Libya’s warring sides uphold a widely flouted arms embargo.
Turkey, Italy and Qatar back the Tripoli administration while the United Arab Emirates and Egypt, as well as France and Russia, back Hifter’s side in the conflict.