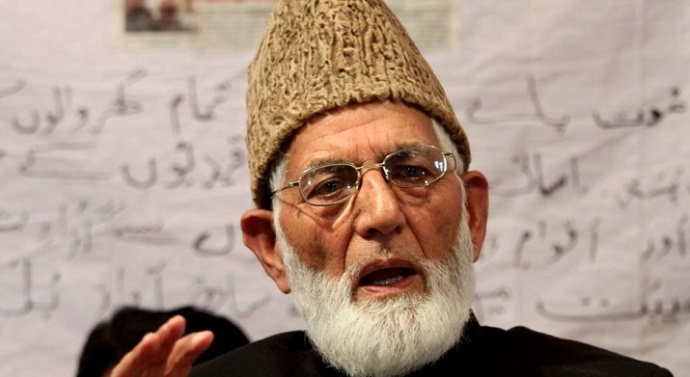 Ailing Hurriyat chairman wants to be buried in Srinagar’s “Martyrs’ Graveyard”.
The wish of ailing Hurriyat chairman Syed Ali Geelani, 90, to be buried in Srinagar’s “Martyrs’ Graveyard” has sent the security agencies into a tizzy as the J&K administration had to stop Internet services on Thursday night in the wake of rumours about the deterioration in the separatist leader’s health.
Sources in the J&K police said Mr. Geelani’s wish, circulated online from across the border, “does pose a security challenge”.
“Geelani’s wish is to be buried at the Mazar-e-Baqee in Saudi Arabia’s Medina. However, he has said ‘to be buried among the martyrs at the Mazar-e-Shohada (Martyrs’ Graveyard), Eidgah in Srinagar, will itself be an honour’,” reads the Hurriyat statement.
The wish was followed by the routine plan for the mourners. The J&K administration acted immediately to stop its circulation in the local newspapers and other social media platforms “to contain any fallout on the law and order”, officials said.
Sources said the administration is dealing with divided opinion whether to allow a burial in Srinagar or not. A section of the security agencies is for “convincing the family to bury him at his ancestral graveyard in Sopore’s Dooru area in Baramulla district”.
A team of doctors from the Sher-i-Kashmir Institute of Medical Sciences (SKIMS) visited Mr. Geelani for a check-up at his residence here. The SKIMS decided against issuing any health bulletin. He has been bed-ridden for many weeks now, with acute chest congestion and bouts of dementia.
Mr. Geelani’s son, Naseem Geelani, said “Abu [father] is stable. He was having chest congestion, but now recovering.”
The Internet was restored on Thursday afternoon, with the police warning of action against all those spreading rumours.