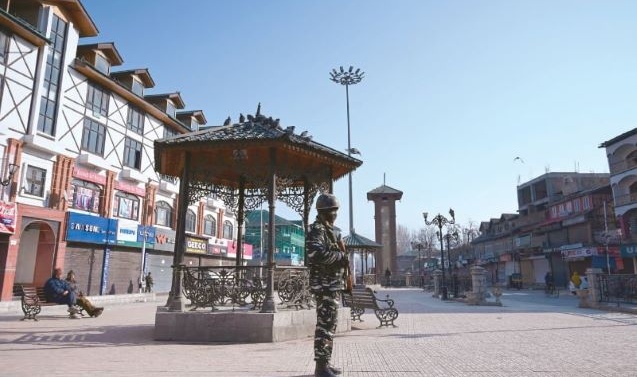 SRINAGAR: Occupied Kashmir was hit by a general strike on Sunday called by the Jammu Kashmir Liberation Front (JKLF) to mark the anniversary of martyrdom of a man who was executed for allegedly taking part in an attack on India’s parliament in 2001.

The JKLF on Thursday called for strikes on Sunday and Tuesday to observe the anniversary of the execution of Afzal Guru, and then that of its founder Maqbool Bhat.

Shops and businesses were shut on Sunday, while there was little traffic on the roads in Srinagar and other parts of the disputed Himalayan region.

Indian troops erected iron barricades and laid concertina wire in parts of the region to block roads, with armed soldiers in full riot gear patrolling the streets to prevent any protests, a government official said.

He said low-speed mobile internet, which was restored last month, had also been shut down as a precautionary measure.

Last month, India’s Supreme Court rebuked the government for shutting down the internet and blocking telecommunications in occupied Jammu and Kashmir.

On Feb 9, 2013, Guru was hanged after the Supreme Court upheld a verdict that he was involved in a 2001 attack on parliament.

Most Kashmiris believe he was not given a fair trial, and his covert execution led to days of deadly protests in the occupied region, where anti-India sentiment runs deep.

Maqbool Bhat was hanged in New Delhi’s Tihar jail on Feb 11, 1984, following his conviction for the killing of a police official.

Kashmiris demand that the two men’s remains, buried within the jail compound, be returned to the disputed region.

Indian police have launched legal proceedings against JKLF for calling the strikes.

The JKLF was banned by India last year as part of a massive clampdown in India-held Kashmir after an attack on Feb 14 in which 40 Indian troops were killed. Its offices were closed and main leaders, including its chairman Yasin Malik, were detained.

Meanwhile, police on Saturday summoned two journalists for questioning in Srinagar for reporting about the strike call issued by the JKLF.

The Kashmir Press Club called it harassment. “It has become a routine with police to summon journalists for their reports,” said Ishfaq Tantray, the club’s general-secretary.

At least 70,000 people have been killed in an uprising in occupied Kashmir and the ensuing Indian crackdown.__Dawn.com