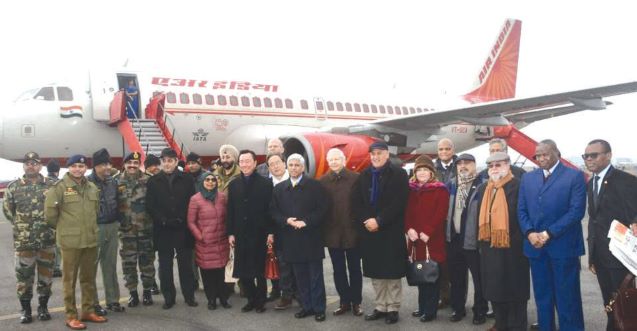 SRINAGAR – The government of India is making preparations to organise a second visit of diplomats, including several European Ambassadors to visit Srinagar and Jammu next week, media reports said on Saturday.

About 20 to 25 envoys from “different geographical regions” are being invited to join the delegation, visiting Kashmir, The Hindu quoting sources reported.

Unlike the last visit in January, when European Union (EU) members declined to travel, and asked to be sent as a combined group of 27 members, this time, several members of the EU have agreed to visit, the report said.

The Hindu further reported that on Friday, External Affairs Minister S. Jaishankar met the EU Heads of Mission (HOMs) in South Block, where he is understood to have discussed his upcoming Brussels visit, the planned visit of envoys to Jammu and Kashmir as well as concerns against the Citizenship (Amendment) Act, which are likely to come up during his visit to Europe.

“We received a lot of positive feedback from the last visit,” said one official source, referring to the delegation, which included U.S. Ambassador Kenneth Juster, who travelled to Jammu and Kashmir on January 9-10.

“While all the Ambassadors expressed their concerns about issues like political detentions and Internet restrictions, they were able to see that there was normalcy on the roads, and the entire Union Territory is not under lockdown as they had expected,” the daily quoting sources added.

The government now intends to take diplomats to the Union Territory on a regular basis, according to the report.

Other sources confirmed that logistical planning and security arrangements for the visit, which will repeat the schedule of the previous visit of the envoys, is being finalised. Helicopters will also be kept on standby, in case there are difficulties in road travel at any point.

The visit will include a briefing by Army officials, and meetings with civil society members and politicians chosen by the government.

Diplomatic sources said negotiations over the scope and schedule of the proposed visit have been on for the past month, and had run into issues over the specific demands by the European diplomats to meet detained former Chief Ministers Mehbooba Mufti, Farooq Abdullah and Omar Abdullah.

It is unlikely that these demands would be met this time either, as the government has just charged all of them under the stringent Public Safety Act, the reported said.

Both the officials and diplomats said they would aim to avoid some of the controversies that cropped up during previous visits by the diplomats, as well as one by a delegation of MEPs to Kashmir in October 2019.

The visit would be timed just before the visit by External Affairs Minister S. Jaishankar to Germany for the Munich Security Conference next weekend (February 14-16). He will then travel to Brussels to meet with European Union (EU) officials on February 17, where he will discuss Prime Minister Narendra Modi’s visit to Brussels for the EU-India summit on March 13.__Kashmir Observer