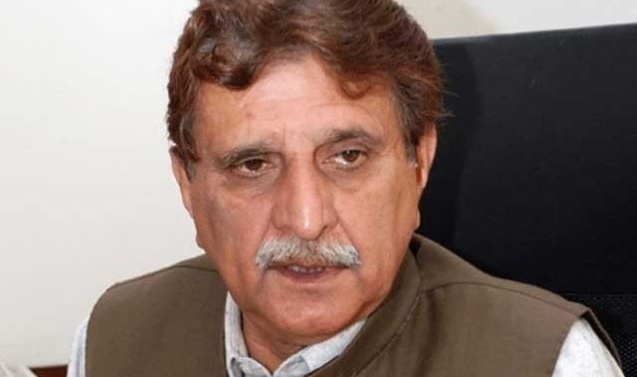 “All of us are backing the people of the occupied land. Washington will never support our cause as Palestine has been destroyed after mediation by the United States. Moreover, Quaid-i-Azam Mohammad Ali Jinnah had warned us that Indian Congress will deceive Muslims,” he underscored.

Addressing the special session of the AJK Legislative Assembly, the prime minister extended support to the Kashmiris, saying that besieged people of Indian Occupied Jammu and Kashmir (IOJ&K) were not alone as Pakistan, despite all its challenges, firmly stands with them.

“Pakistan is helping Kashmiris despite all difficulties. A national consensus should be developed in Pakistan to unite the nation,” Haider said, expressing profound gratitude to the Pakistani nation and the government for proffering unwavering support to the oppressed Kashmiris by observing the ‘Solidarity Day’ in a befitting manner.

Referring to Pakistan as “an ultimate goal for Kashmiris”, AJK premier asserted that people of occupied Jammu and Kashmir are ready to receive enemies’ bullets that are aimed at Pakistan on their chest.

Prime Minister Imran also addressed the special session of the AJK Legislative Assembly, saying that India’s August 5 move would pave way for the independence of the occupied valley.

Earlier, upon PM Imran’s arrival in Muzaffarabad, the AJK premier, Speaker Legislative Assembly Shah Ghulam Qadir and other high-ranking officials accorded a warm welcome to the prime minister of Pakistan, who was also given guard of honour upon his arrival at the AJK Legislative Assembly.