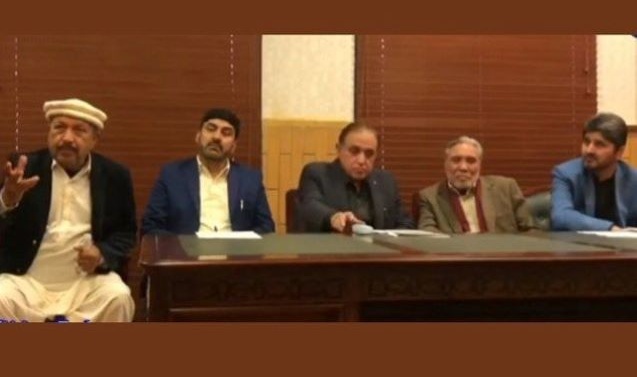 GILGIT: Members of the Gilgit-Baltistan (G-B) Legislative Assembly have called on the federal government to either make the region a constitutional province as recommended by a high-level parliamentary committee or grant it special rights for being regarded as part of disputed Himalayan valley of Kashmir.

The demands were made by the lawmakers belonging to both opposition and treasury benches — including G-B Assembly Speaker Fida Nashad, Minister Works Dr Iqbal and Opposition Leader Mohammad Shafi — at a joint press conference in Islamabad late Friday.

“If G-B can’t be made constitutional province, its people should be given special rights enjoyed by residents of a disputed territory under the UN charter,” said Nashad.

“We are no longer willing to be served under another governance order,” said the speaker, referring to orders promulgated from time to time in G-B.

The first governance order, through which G-B could have its first ever chief minister and governor, was promulgated in 2009, followed by The Government of Gilgit-Baltistan Order, 2018-19.

“We are comfortable with recommendations of the Sartaj Aziz committee to some extent. Therefore, the same should be implemented without any further delay,” said another lawmaker, referring to a committee formed in 2017 under the then adviser to the prime minister on foreign affairs.

The committee recommended that the G-B be given status of a provisional province, till the final settlement of the Jammu and Kashmir dispute and implementation of the UN resolutions on the disputed Himalayan region.

It also recommended that G-B people should be given special representation in the parliament till the settlement of Kashmir issue.

Minister Works Dr Iqbal said, “We will think of a way forward if our demands aren’t met”.

Opposition Leader Muhammad Shafi said the federal government couldn’t be trusted as it had little interest in matters of G-B.

Nationalist leader Nawaz Naji said any attempt of creating hurdles in the way of granting constitutional rights to the people of G-B will be condemned.

The lawmakers also warned the federal government about growing unrest among the youth, who they said “are more aware about their rights than their predecessors due to social media”.

“This is the digital age and awareness created more frustration in the youth,” said the lawmakers, adding Pakistan’s enemies can exploit the situation if grievances were not addressed promptly.

They praised efforts of Army Chief General Qamar Javed Bajwa for the region, saying he had always supported G-B’s constitutional cause according to aspirations of its people.

The lawmakers said they will continue to support the Kashmir cause come what may.__Tribune.com