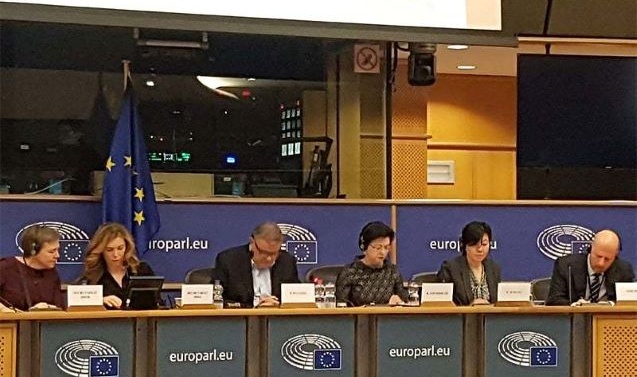 The European Union Parliament is set to debate and vote on a scathing resolution against India’s annexation of occupied Kashmir in clear violation of United Nations Security Council resolutions and the country’s enforcement of new citizenship laws which have been widely criticised for discriminating against Muslims.

The resolution, which has been drafted and supported by lawmakers from the Renew Group, has called on the European Union and its member states “to promote the implementation of the UN Security Council resolutions on Kashmir”.

Condemning the “unilateral changes made to the status of Kashmir by India”, the draft resolution noted that India has never implemented UN “Security Council resolutions requiring a referendum allowing all Kashmiris to determine the future status of Kashmir”.

It also viewed with concern the rise in tensions between Pakistan and India – “both being nuclear weapons states” – which it said were “fuelled by the controversial decisions of the Government of India on Kashmir and citizenship”.

Urging India to repeal the “discriminatory amendments” to its citizenship law, the draft resolution says the new law “violates India’s international obligations to prevent the deprivation of citizenship on the basis of race, colour, descent, or national or ethnic origin as enshrined in the ICCPR and other human rights treaties.”

Noting that the new law has “encouraged” violence both from the police and pro-government groups, which “are clear breaches of the human rights of residents of India and its neighbouring countries”, the resolution urges the government of India “to immediately engage in peaceful dialogue with various sections of the population” and “to ensure that security forces comply with the United Nations Basic Principles on the Use of Force and Firearms by Law Enforcement Officials”.

The resolution also mentions the violence that ensued at the Jawaharlal Nehru University earlier this month, referring to the university as a “a leading location for students protesting against the CAA and the National Register of Citizens (NRC)” and where “police witnessed the attack but refused to control and arrest the mob”.

“According to the Indian Constitution, India is a sovereign secular democratic republic and including religion as a criterion for citizenship is therefore fundamentally unconstitutional,” reads the resolution, which will be debated in the parliament on January 29, according to the plenary schedule available on the EU Parliament’s website.

The resolution, which will be put up for voting on January 30, says the CAA “sets a dangerous precedent and represents an intensification of the [Indian] Government’s Hindu nationalist agenda”, adding that “it is difficult to view the CAA in isolation, as both the amendments and the NRC could deprive minorities of their citizenship of India” while “only Muslims excluded from the NRC will have difficulty winning their cases at foreign tribunals”.

Earlier this month, several diplomats from EU countries had rejected an invitation by Indian authorities for a rare visit to occupied Kashmir, where a complete curfew and communications blockade has been imposed by authorities since Aug 5 last year.

The diplomats said they were not interested in a “guided” tour and wanted to meet people “freely” and of their own choosing, according to reports published by multiple Indian media outlets. The diplomats had also expressed their reservations on not being allowed to meet the detained political leadership of occupied Kashmir, particularly, former chief ministers Farooq and Omar Abdullah and Mehbooba Mufti, who are still locked up.__Dawn.com