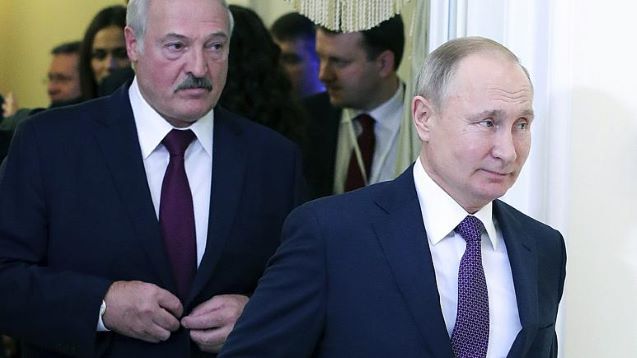 When the leader of Belarus, Alexander Lukashenko, signed an agreement in 1997 to gradually enter into a union state with neighbouring Russia, then Russian President Boris Yeltsin and the European Union appeared to show little interest in the post-Soviet state.

Under the agreement, Belarus and Russia would adopt a shared currency, common foreign and defence policies, a common parliament, a single tax code, open borders and a commitment to back sanctions imposed by either government on another state.

In the absence of alternatives, a symbiosis with Belarus’s larger neighbour seemed like the best option.

“The EU was practically not interested in Belarus,” said Evgeny Treshchenkov, associate professor at the Department of International Relations in the post-Soviet space of St. Petersburg State University.

“[Europe] did not offer Belarus attractive alternatives, so the political elites of the country chose the most accessible and understandable option.”

But fast forward more than 20 years and the landscape has changed. The integration may still use the language of “common” policies and a “shared” currency, but Vladimir Putin’s Russia is a very different animal to Yeltsin’s.

We can’t be a part of some other country.

“The two countries have moved apart to a large distance [since the deal was signed in the 1990s],” said Rumen Dobrinsky an expert on Belarus from the Vienna Institute for International Economic Studies. “I don’t see anyone in Belarus who would be willing […] to become a part of Russia. Belarus has enjoyed its independence.”

Meanwhile, Lukashenko knows that a union with Putin’s Russia in 2020 would be one sided.

“If there is a joint common parliament and government, of course, it will be dominated by Russia,” said Dobrinsky. “If there is a common currency, it will be the Russian Rouble, so, virtually, Belarus will lose all its international independence.”

Add to that the fact that Lukashenko – who has ruled Belarus since independence in 1991 – sees in Putin an adversary that he never saw in Yeltsin, who by 1997 had squandered his early popularity and become a something of a liability on the foreign stage.

“Lukashenko’s attitude to integration has changed […] because before he believed that he looked like a suitable political leader in the post-Soviet space in the eyes of Russians, but Vladimir Putin turned out to be more popular,” Treshchenkov said.

Once upon a time, Treshchenkov added, Lukashenko was believed to have plans to take over in the Kremlin after Yeltsin.

Speaking on Friday, Lukashenko said “Belarusians would eat me alive” if he was to pursue integration with Russia, and about that, he may well be right. Talks between Putin and Lukashenko in December led to angry protests on the streets of Minsk.

The problem for Lukashenko is that for Putin, a deal is a deal. As part of the agreement in 1997, Russia committed to providing cut-price oil and gas to Belarus. For the last 22 years, it has done so, and then on 31 December 2019, Moscow turned off the taps. For the last three weeks, Belarus has received no energy from its neighbour.

Speaking to workers at a paper plant on Friday, Lukashenko said that Russia had halted oil and gas supplies to Belarus in order “to dissolve Belarus … in brotherly Russia.

The Belarussian leader added: “We have our own country, we’re sovereign and independent. With our brains and hands, we earn what we can, we’re building our own country. And we can’t be a part of some other country.”

Belarus relies on Russia for 80% of its energy needs, but is pursuing deals with the US, Saudi Arabia and the United Arab Emirates, Lukashenko announced Friday.

“Americans, Saudi Arabia, the Emirates… I have a brilliant relationship with them, they say they will supply as much oil as needed,” Lukashenko said, insisting that his intention not to concede to Russia’s demands is “not a bluff”.

But Aliaksandr Klaskouski, director of analytical projects at BelaPAN and a Belarusian political expert, said that while Belarus can attempt to strike deals with other nations for oil and gas, the Belarussian economy remains extremely closely tied to Russia.

“Minsk had to negotiate. […] It is impossible to simply cut ties with Moscow and redirect to new markets overnight,” Klaskouski said.

There is also the fact that while Lukashenko would like economic ties that would reduce his reliance on Russia, his unwillingness to implement political reforms hold him back.

In typically dubious elections last year, not a single opposition candidate won a seat in the Belarussian parliament. It is a democratic deficit that Putin – a master of creative methods to remain in power – is happier to overlook than Brussels.

“Lukashenko is afraid to go for economic reforms, not to mention political ones, because he fears for the stability of his regime. And the absence of reforms hinders diversification of the economy, hinders the rapprochement with Europe and ties Belarus to Russia,” he said.

But not everyone agrees that Putin’s Russia holds the cards when it comes to relations with its neighbour.

Mathieu Boulegue, from Chatham House, says that on the contrary: “Russia needs Belarus in many more ways than we think – especially in times of international sanctions […]. Russia values a stable Belarus more than anything, especially now.”__EuroNews