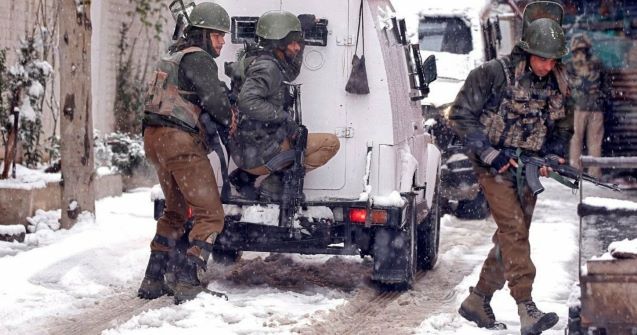 SRINAGAR – Police on Saturday claimed to have killed three Jaish-e-Muhammad (JeM) militants, including the outfit’s chief Qari Yasir in a gun-battle in Haripari village of Tral in South Kashmir.

“We have neutralised three militants in the Tral encounter and one of them is Qari Yasir who was a self-styled Kashmir chief of JeM. He was also involved in Lethpora blast. He was an IED expert and was involved in recruitment as well relocation of militants coming in from Pakistan,” Inspector General of Police, Kashmir, Vijay Kumar said while addressing a joint presser with General officer commanding of the Srinagar-based Chinar Corps, Lt Gen KJS Dhillon here this evening.

IGP Kumar said the militant group was planning to carry out a major incident on the Republic Day, which has now been averted.

Three army personnel were injured in the initial firing and have been hospitalised.

The IGP said the police had been getting regular inputs about an IED attack in Srinagar or its surroundings.

“We were getting the names of Burhan and Yasir. Moosa, a buddy and a second in-command of Yasir was also with him and we are sure once we identify the bodies, one of them will be Yasir as we had inputs about his presence there,” he said, adding Yasir and Moosa belong to Pakistan, while Burhan was a local.

Lt Gen Dhillon said with the killing of the three militants “a major incident on January 26 has been averted”.

“The JeM Module was active and was planning to do something sensational on the Republic day,” he said.

He said the operation was still on.

The GoC said after the last year’s Pulwama IED attack, the JeM leadership was targeted and neutralised totally, but the group was trying to resuscitate itself.

Asked about the infiltration along the Line of Control (LoC), the GoC said Pakistan and its army was trying to infiltrate more militants inside Kashmir.

“But, our Army is giving them a befitting reply. Not only the Pakistani militants, but Pakistani army has suffered so many losses that on December 27 last year, Pakistani DGMO requested Indian DGMO to minimize the offensive. Our DGMO accepted the Pakistani request, but Pakistan has not mended its ways and is still infiltrating militants,” Lt Gen Dhillon said.

He said the ceasefire violations were taking place on the LoC and the army was giving a befitting reply to the Pakistani aggression.

“There are militants at the launch pads across the LoC and they are trying to infiltrate, but we will foiling their attempts,” the Army officer said.

CASO Carried Out In Chadoora

They said troops of Rashtriya Rifles (RR), Special Operation Group (SOG) of Jammu and Kashmir police and CRPF launched a joint search operation in a village at Chadoora in Budgam following specific information about the presence of militants.

All exit pointes were sealed and house to house searches launched, they said, adding many suspected persons were questioned.

However, so far no contact was established with militants, they said, adding the operation was still going on when the reports last came in. Early this week, similar CASO was conducted in another village in Chadoora though no one was arrested.__Kashmir Observer