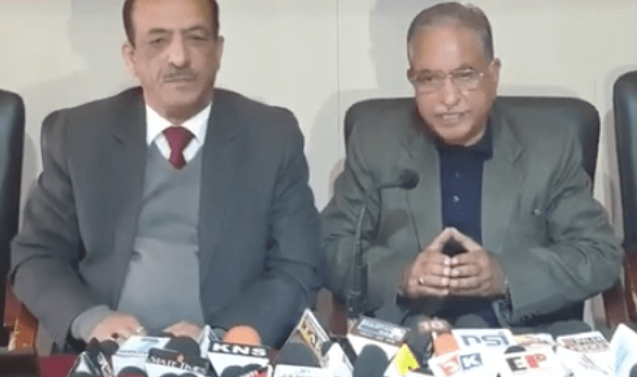 JAMMU: Ruling out formation of any ‘third-front’ in Jammu and Kashmir, the political leaders affiliated with different political parties Thursday said that the saner voices of the erstwhile Jammu and Kashmir have come together to demand what rightfully belongs to the people of Union Territory.

Former minister Mohammad Dilawar Mir said nobody has the power to expel him from the Peoples Democratic Party (PDP) except the president and former Chief Minister Mehbooba Mufti who is under detention in Srinagar.

Mir, former General Secretary of PDP, was among eight party leaders expelled from the PDP for going “against the will of the people” by engaging in parleys with the government on January 9. Besides Mir, the others expelled PDP leaders include Rafi Ahmad Mir, Zaffar Iqbal, Abdul Majeed Padroo, Raja Manzoor Khan, Javaid Hussain Baig, Qamar Hussain and Abdul Rahim Rather — all former MLAs.

“I am still in PDP and nobody has the power to expel me except the party president who is under detention. Nobody can take such a decision in her absence,” Mir told reporters here.

However, Mir said he is addressing a press conference in his individual capacity and not as a PDP leader.

“Who has the power to expel us from the party when our president and vice president Abdul Rehman Veeri are under detention. What was the justification for our expulsion because we met the Lt Governor to raise the public issues,” Mir said.

In a statement on January 9, the PDP had said, “in view of the development post August 5 and the unilateral move of the government of India which has violated the will and hurt the sentiments of people, it has come to the attention of the party that certain party leaders have been part of the parleys which go against the interests of the state, official position and core beliefs of the party.” “The party disciplinary committee has recommended the expulsion of all these leaders from the basic membership of the party,” the PDP statement said.

Asked about the reports suggesting the emergence of a third front under the leadership of former PDP minister Altaf Bukhari who led the delegation to meet the Lt Governor, he said, “We met Murmu on individual capacity…whenever some people come together, people start talking about third front which is not a reality. Everything will come to the fore. On abrogation of Article 370, he said the matter is subjudice and the Supreme Court is the final authority to make a decision on it.” “The people in Kashmir were neither expected such a move nor desired it. The credit goes to Government of India as well as the people for no violence post abrogation of the special status. If the people stayed back, it does not mean they have liked the government move,” Hassan said. He said, “If the Supreme Court restored the special status, nothing like that but there is one more option that is a consensus among national political parties which is a least possibility at the moment in the given situation in the country.”

“We have to live and move forward. Domicile laws are prevalent in different parts of the country and if the demand is being raised from Jammu and Kashmir, what is wrong in it,” Hassan said. He said there can be different voices and these voices need to be addressed in a democratic way.

“The way the entire political leadership, youth, trade union leaders, lawyers were detained in not good. You cannot gag the voices of the people but violence should not be off course,” he said. Hassan said Kashmiri pandits left the valley under threat and duress and the government of India need to take cognizance of their plight and address their problems.

“Kashmiri pandits are our brothers and whatever happened was a bad phase,” he said.

Replying to a query about shaping up of a possible third-front, the duo said there was no third front in offing while some saner voices have joined hands to demand what rightfully belongs to Jammu and Kashmir people.

“Everything regarding third front will come to the fore. The meeting by former legislators and ministers of erstwhile Jammu and Kashmir State with the Lieutenant Governor Girish Chandra Murmu was aimed to demand rights of people. We talked about the sufferings of people including Srinagar-Jammu highway, which remain closed for 20 days in a month during winters, thus causing hardship to the people in reaching their destinations,” Ghulam Hassan Mir said, demanding Government of India to start dakota services in Jammu and Kashmir.

He said that they presented a memorandum before the LG Murmu which mentioned certain issues including the development as well as the rights of people including internet restoration, revival of economy post August 5 decision.

“Since we met LG Murmu, some positive steps were taken including release of leaders and other persons of Kashmir who were lodged outside jails,” he said, adding that ahead of the Republic Day, the leaders who have been put under preventive custody be released as ‘a goodwill gesture’. He said that the persons who are lodged at outside jails be also released ahead of the Republic Day.

The duo leaders during a presser also demanded restoration of internet services in Jammu and Kashmir, saying that services were although restored in Jammu and some districts of Kashmir, but these services should be restored fully especially to the media persons, who have been facing hardships while performing their duties. “At least broadband services should be restored to the media persons, traders and others who are facing hardships from last five months,” they said.

They said on the eve of this R-Day, all the curbs across Jammu and Kashmir should be lifted. “We are also demanding the central government to restore Statehood to Jammu and Kashmir, secure jobs and land in UT,” they added.__KT News