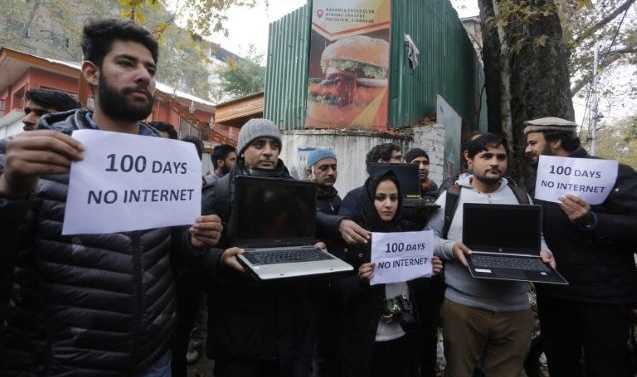 Srinagar: After more than five months of internet blackout, the Jammu and Kashmir administration on Tuesday evening allowed broadband in hotels, travel establishments and hospitals but only on white-listed websites.

The government order again excludes media houses which remain without internet since August 4.

In a three-page order, the home department asked internet service providers to install firewalls and carry out “white listing” of websites before providing these services. However, social media websites continue to be banned.

In order to facilitate tourism, broadband internet would be provided to hotels and tour and travel establishments, the administration’s order signed by Principal Secretary Shaleen Kabra, said. The order however is silent on internet ban on media organisations operating in the Kashmir Valley.

The relaxation comes three days after the Supreme Court ordered the Jammu and Kashmir administration to review within a week all restrictive orders imposed in the Union Territory. The Court had observed internet was a fundamental right of the people.

Govt order said the institutions and government offices being provided internet would need take measures to prevent its misuse. These institutions will have to appoint nodal officers, keep a record of persons using internet, manage and monitor daily usage, and ensure that only authorised persons can access it.

Jammu, where broadband is already functional, has been given further relief with restoration of 2G facility on mobile phones but only in select districts.

“2G mobile connectivity on postpaid mobiles for accessing white-listed sites, including for e-banking, shall be allowed, to begin with, in the districts of Jammu, Samba, Kathua, Udhampur and Reasi,”said Principal Secretary. “However, in the other districts of the UT of J&K, mobile internet connectivity shall remain suspended till further directions…”

The principal secretary also said the Kashmir division would set up 400 additional kiosks, apart from the 844 already in place, to extend the facility of fixed line broadband connectivity.

Earlier broadband was restored in hospitals. However doctors said it has been restricted to administrative purposes only.

The doctors claimed they still have no access to internet for medical research and academics.

On August 5, the Centre had revoked Jammu and Kashmir’s special constitutional status, imposed a curfew, detained political leaders, and banned all communication services.

The lockdown is still in place but some curbs have been lifted. On the midnight of January 1, SMS services were restored. The Ladakh administration had restored 4G mobile internet connectivity in Kargil on December 27, after a gap of 145 days. Postpaid mobile phone services had been restored across all networks in the Kashmir Valley on October 14.__Kashmir Observer