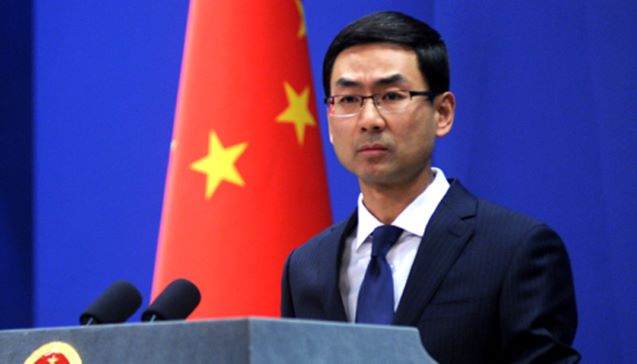 China on Tuesday said that the move by the US to drop the “currency manipulator” tag against its name was in line with “facts” and the consensus of the international community.

Soon after the announcement, the Chinese currency, the yuan, soared on Tuesday morning, days ahead of the two countries signing the phase 1 deal to resolve a tit-for-tat trade war.

Vice premier Liu He, who was heading the trade talk negotiations for China, is in Washington to sign the deal.

Beijing didn’t release any additional information about the expected trade deal with the Chinese foreign ministry directing queries to the commerce ministry.

“For specific questions about the Sino-US economic and trade negotiations and the first-phase economic and trade agreements, I suggest you ask the Ministry of Commerce. In addition, please be patient, the situation may become clearer in two days,” foreign ministry spokesperson Geng Shuang said at the regular ministry briefing on Tuesday.

On Monday night, Washington dropped the designation of China as a “currency manipulator”, following the release of a report from the US Treasury Department.

In its semi-annual report on macroeconomic and foreign exchange policies of major trading partners of the US, the Treasury Department said no major US trading partner at this time met the relevant legislative criteria for currency manipulation.

Noting that the department assessed developments over the last several months with China and its currency practices, US treasury secretary Steven Mnuchin said in a statement that “China has made enforceable commitments to refrain from competitive devaluation, while promoting transparency and accountability”.

“China is not an exchange rate manipulator. The latest conclusion of the US is in line with the facts and the consensus of the international community,” spokesperson Geng said on the development.

“A recent International Monetary Fund (IMF) assessment concluded that the level of the RMB exchange rate is generally in line with economic fundamentals, and objectively denied that China is a ‘currency manipulator’,” Geng added.

“China is a responsible big country. We have repeatedly reiterated that we will not engage in competitive currency devaluation and do not use the exchange rate as a tool to deal with external disturbances such as trade disputes.”

Geng said that China will “unswervingly” deepen the reform of the exchange rate marketisation, continue to improve the managed floating exchange rate system based on market supply and demand, adjust with reference to a basket of currencies, and keep the RMB exchange rate basically stable at a reasonable and balanced level.

In August, a sharp escalation of the China-US trade war sank the yuan under the key 7-per-dollar level for the first time since the 2008-09 global financial crisis.

According to the nationalistic tabloid Global Times, following the currency’s plunge, the US Treasury labeled China a “currency manipulator”, drawing criticism from Beijing and international institutions with observers believing that the Trump administration used the currency manipulator label as a political tool to gain leverage in the trade talks.

E Zhihuan, chief economist at Bank of China (Hong Kong), said that the US’ removal of the label for China is a result of the smooth progress toward the first phase of trade deal between the two countries.

“The yuan’s value is decided by market supply and demand. Its fluctuation is normal market reactions. The yuan experienced a complete fluctuation cycle after returning to above 7 again,” she told the tabloid.

Meanwhile, a social media account linked to the Chinese government has issued a note of caution on the trade deal by saying that the “trade war is not over yet” and that it is “just the first round of a game”.

Taoran Notes, affiliated with the official Economic Daily, said the deal is just “the first step to solve a problem”.

“We must bear in mind that the trade war is not over yet – the US hasn’t revoked all its tariffs on China and China is still implementing its retaliatory measures. There are still many uncertainties down the road.”__Hindustan Times