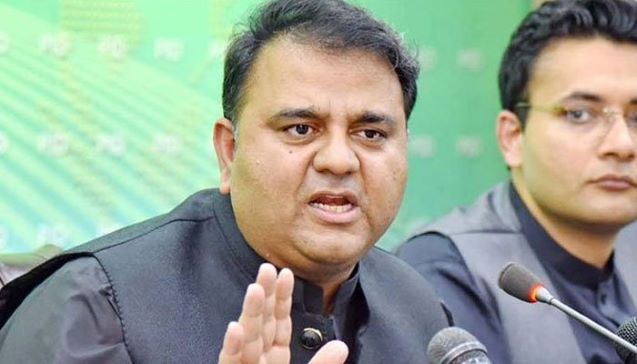 ISLAMABAD: Federal Minister for science and technology, Fawad Chaudhry, on Sunday defended his right to slap TV host Mubasher Lucman as he made derogatory comments about him during a show a couple of days ago.

In a conversation with the host of Geo News’ programme Naya Pakistan, Shahzad Iqbal, the minister said his reaction was natural and before anything else, he is a human being.

“Ministries come and go,” he said.

“I have been a minister earlier as well. I will not tolerate personal attacks against myself. We are all human beings and will react when someone makes such false allegations.”

Chaudhry issued the statement hours after he slapped Lucman, the TV anchor, at an event for salaciously linking him to Tik Tok star Hareem Shah. The altercation had taken place at the valima ceremony of provincial minister Mohsin Laghari’s son where Pakistan Tehreek-e-Insaf (PTI) leader Jahangir Tareen was also present.

Stressing having no regrets for hitting Lucman, he said he did not recognise the principle that one should not hit another person just because they were a federal minister.

The minister rejected allegations he was involved in any way with Hareem Shah as the TV anchor had suggested and said he hadn’t even met the Tik Tok star once in his life.

“Thousands of people meet me every day,” he said. “People click selfies with me. However, I do not know who she is.”

He criticised TV anchors Lucman and Sami Abraham by saying they were not journalists.

“Has any journalist body condemned my actions? Did the Punjab Union of Journalists say anything about it? These [Sami Abraham and Mubasher Lucman] are accidental journalists; they have nothing to do with journalism,” he said.

He said this was not the first time that Lucman had levelled false allegations and maligned someone’s character to get views on his YouTube channel. The minister said he had previously targeted PTI leaders Shah Mahmood Qureshi and Zartaj Gul Wazir with false allegations as well.

In response to another question, he said it did not matter if the TV anchor was close to the prime minister or had attended PTI sit-in protests in Islamabad.

“Lots of people supported us during the 2014 dharna [sit-in],” he said. “Does that give him or anyone else the license to make such allegations against me?”

Chaudhry noted in response to another question — about how Hareem had gained access to senior PTI leaders — that the Tik Tok star had been sitting in the first floor of the Ministry of Foreign Affairs (MoFA) where everyone could have gone and sit. He said peons and the common man could also come to his office.

“Do you expect a person like Shah Mahmood Qureshi to respond to such accusations? Most people avoid entertaining such allegations owing to their sense of respect and integrity.”__The News