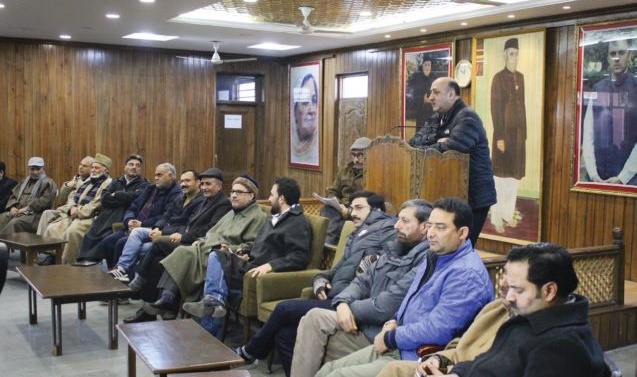 SRINAGAR – There are signs of revival of mainstream political activity in Kashmir after the revocation of Article 370 on August 5 with the National Conference and the People”s Democratic Party (PDP) holding meetings on Monday.

The PDP leadership met for the first time since the abrogation of Article 370 at party headquarters in Srinagar. It was regarding the fourth death anniversary of party founder Mufti Mohammad Sayeed on January 7.

The meeting was chaired by State Secretary Abdul Hameed Kosheen and was attended by zonal party in-charges and other office bearers.

It was agreed that the party will restart political activities in Kashmir and the second rung party leadership will start a Valley wide contact program with its workers.

“Political activity must be allowed in Kashmir, Tahir Sayeed, spokesperson of PDP said. “We have been requesting for a meeting with party Chief Mehbooba Mufti, which has not been granted so far,” he said.

The party held the view that the future course of action of the PDP will be decided by its top leadership detained since August 5.

“We demand the immediate release of all the political detainees,” Sayeed said.

The party alleged that dissent is suppressed in Kashmir.

The party also demanded that the internet must be restored in Kashmir.

The National Conference also held its first provincial meeting in Kashmir on Monday since the abrogation of Article 370 on August 5.

The meeting was chaired by provincial secretary Showkat Ahmad Mir.

“We had invited leaders from across the valley, it was a fairly good gathering despite many of our leaders are detained, Imran Nabi Dar, provincial spokesperson National Conference said.

The National Conference passed two resolutions: “The release of all political detainees in Kashmir including party President Farooq Abdullah and vice president Omar Abdullah and condemned the Citizenship Amendment Law and violence against peaceful protests by students”.

It was also decided that the future strategy will be discussed only after the top leadership of the party is released.

“All the members of our core committee have been detained, we will wait until the leadership is released,” Dar said. “They have to take a decision about the future strategy of the party,” he said.__Kashmir Observer