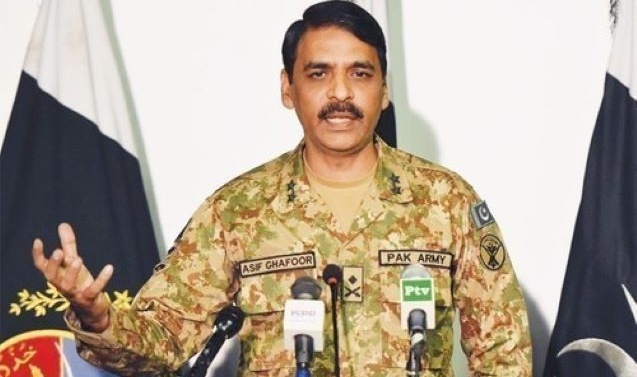 Maj Gen Asif Ghafoor, in a statement issued following the verdict in the high treason case against General retired Pervez Musharraf on Tuesday, said the “decision given by special court has been received with lot of pain and anguish by rank and file of Pakistan Armed Forces”.

The statement by the director general of Inter-Services Public Relations (ISPR) comes after sources said a meeting of the top military leadership was held at the General Headquarters in Rawalpindi in the wake of the judgement.

“An ex-Army Chief, Chairman Joint Chief of Staff Committee and President of Pakistan, who has served the country for over 40 years, fought wars for the defense of the country can surely never be a traitor,” said the ISPR statement. “The due legal process seems to have been ignored including constitution of special court, denial of fundamental right of self defence, undertaking individual specific proceedings and concluding the case in haste.”

“Armed Forces of Pakistan expect that justice will be dispensed in line with Constitution of Islamic Republic of Pakistan,” he said.

Earlier today, a special court in Islamabad found Musharraf guilty of high treason and handed him a death sentence under Article 6 of the Constitution. A detailed judgement is expected within 48 hours.

It’s the first time in Pakistan’s history that a former army chief and ruler of the country has been sentenced to death. Musharraf, who was sentenced in absentia, has been out of the country since 2016, when he was allowed to leave on bail to seek medical treatment abroad.

The former military chief is currently in Dubai in the United Arab Emirates. He was admitted to a hospital following deterioration of his health earlier this month. In a video statement from his hospital bed, he called the treason case “absolutely baseless”. “I have served my country for 10 years. I have fought for my country. This [treason] is the case in which I have not been heard and I have been victimised,” he had stated.

Musharraf was booked in the treason case in December 2013 and indicted on March 31, 2014. The prosecution had tabled the entire evidence before the special court in September the same year. However, due to litigation at appellate forums, the trial of the former military dictator lingered on and he left Pakistan in March 2016 to seek medical treatment, promising to come back to his “beloved homeland” in a few weeks.

The military over the course of the trial has remained silent on the case’s developments.

Musharraf’s time in the military

Born in pre-Partition Delhi on August 11, 1943, Musharraf attended Saint Patrick’s School after his family settled in Karachi. Later, he joined the Pakistan Military Academy at Kakul and graduated from the institution in 1964. He was subsequently commissioned in the Pakistan Army.

His first battlefield experience came during the 1965 Indo-Pak war and he served in the elite Special Services Group (SSG) from 1966-1972. During the 1971 war with India, Musharraf was a company commander of an SSG commando battalion. After 1971, he continued to excel in several military assignments and gained rapid promotions within the army.

In October 1998, he was appointed as chief of army staff by the then premier Nawaz Sharif. Musharraf’s name became known in the wake of the Kargil conflict for which the retired general has been severely criticised, both at home and internationally. In October 1999, he overthrew Nawaz’s government in a bloodless coup and later became the country’s president.

On October 12, 1999, troops took over the Prime Minister House after Nawaz prevented Musharraf from landing at Karachi airport upon his journey back from Sri Lanka.

On finding out, Musharraf declared a state of emergency, suspended the Constitution and assumed the role of chief executive. There were no organised protests against the coup within Pakistan but the measure was thoroughly criticised by the international community. In June 2001, Musharraf became the president of Pakistan.__Dawn.com