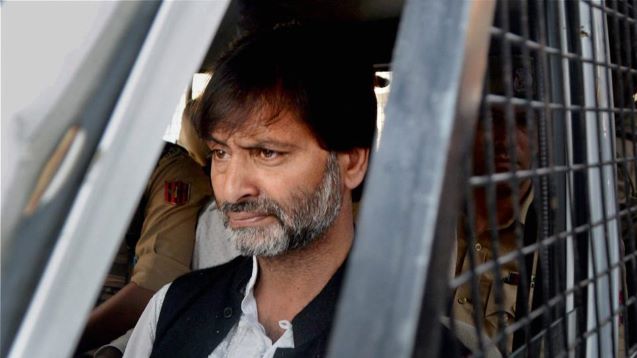 JAMMU – Most of the accused in the killings of Indian Air Force personnel could not appear in the TADA Court Jammu due to cancellation of flights and closure of Srinagar-Jammu Highway.

The counsel for the accused Advocate Muhammad Aslam Ghoni and YogeshBakshi were present during which the statement of JKLF Chairman Muhamamd Yasin Malik was recorded through video conference. Malik is lodged at the Tihar Jail in New Delhi.

Two charge sheets have been filed by the CBI against the accused before the designated TADA court in Jammu. At least 3 FIRs were lodged by Jammu Kashmir Police at police station Nowhatta, MR Ganj and ShaheedGanj in 1989 against the accused including JKLF Chief.

The Court after hearing the arguments and counter arguments in the case related to the killing of Indian Air Force Personnel and abduction of Dr Rubiya Sayeed listed the case for next hearing on December 21 later this month.

Javid Ahmed Mir, one of the accused in the case said that this was the third hearing of the case this month.

“We fail to reach Jammu sometimes and this time also due to inclement weather, most of the accused failed to make it to the court. We in a way are being forced to visit Jammu from Srinagar twice or thrice in a month and this is sheer harassment,” Mir said.

He said it is not an easy task to visit Jammu in this harsh winter when road often remains blocked and flights get cancelled.

“I have due regard for the court but I urge the case to be shifted to Srinagar on humanitarian grounds,” Mir added.__Kashmir Observer