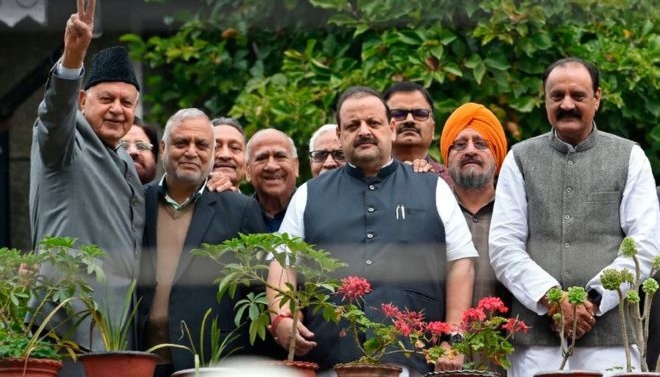 Dozens of mainstream political leaders and workers have been under detention in Indian-administered Kashmir since August, when India stripped the region of its semi-autonomous status. Sameer Yasir reports on why political workers in the valley feel betrayed.
Saleem Mir stood pensively by the window of his room overlooking the Jhelum river, which cuts through the heart of Srinagar and flows into Pakistan.
Mr Mir, who toiled for years to get people to vote for Kashmir’s oldest political party, the pro-India National Conference, now feels like a total outcast in his own homeland.
Kashmiris like Mr Mir are used to being branded as “traitors” by their own people for siding with India during the 30-year armed revolt against Delhi’s rule in the Muslim-majority region. Many have relatives or friends who have been killed by militants for siding with India.
“Now we are also enemies in the eyes of India,” said Mr Mir, who belongs to Kulgam district, a region that has witnessed a spiral of deadly violence in recent years.
In August, Prime Minister Narendra Modi’s ruling Bharatiya Janata Party (BJP) oversaw a crackdown that they argued was necessary to prevent disorder in the disputed region.
It was stripped of its autonomy, split it into two federally-run territories, put under a lockdown, and most of the state’s political leaders and workers, including those who have been loyal to India, were incarcerated.
“Our intention is that politicians do not engage in any activities that could serve as a magnet for violence, as it has been the case in the past. A related issue is that social media and the internet have been used to radicalise. We want to prevent the loss of life,” India’s Foreign Minister Subrahmanyam Jaishankar said.
Mr Mir was among more than 5,000 people, including businessmen, civil society members, lawyers and activists, who were detained. Those still under detention include former chief ministers Omar Abdullah, Farooq Abdullah and Mehbooba Mufti – the first woman to be hold the position – as well as several former lawmakers.
Former chief minister Mr Abdullah, still a member of parliament, has been detained under the controversial Public Safety Act (PSA), which allows detention without formal charge for two years, among other things.
Mr Abdullah, whose family had been instrumental in tying Kashmir’s future to Delhi, appeared on television before his detention and appealed to the people of India, saying he had stood with them and it was their time to reciprocate.
Mir Mohammad Fayaz, an MP belonging to the PDP, has written to the federal Home Minister Amit Shah, demanding the release of all political leaders. He said that the leaders had been recently shifted to a new jail in “a very humiliating and downgrading manner”.