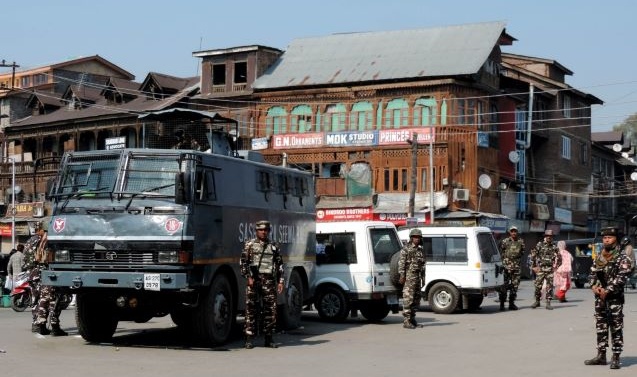 SRINAGAR – Security was beefed up in Srinagar on Wednesday, a day after two blasts rocked Kashmir killing two persons and injuring several others, officials said.

They said security personnel have been deployed at sensitive locations, including a few market places.

“This is to ensure that the citizens get a sense of security and businesses operate normally,” the officials added.

The deployment of security personnel comes a day after two blasts in Anantnag and Hazratbal area of the city here left two persons dead and several others injured.

Meanwhile, shops opened Wednesday morning at most places across the valley, including Srinagar, the officials said.

They said most of the shopkeepers, however, downed their shutters in the afternoon to join the protest against the abrogation of Article 370. A few remained open for longer hours.

Pre-paid mobile phones and all internet services continued to remain suspended since 5 August when the Centre announced the decision to abrogate Article 370 of the Constitution and to bifurcate Jammu and Kashmir into two Union territories.

Most of the top-level and second-rung separatist politicians have been taken into preventive custody while mainstream leaders including two former chief ministers — Omar Abdullah and Mehbooba Mufti — have been either detained or placed under house arrest.

The government has detained former chief minister and sitting Lok Sabha MP from Srinagar Farooq Abdullah under the controversial Public Safety Act, a law enacted by his father and National Conference founder Sheikh Mohammad Abdullah in 1978 when he was the chief minister.__Kashmir Observer