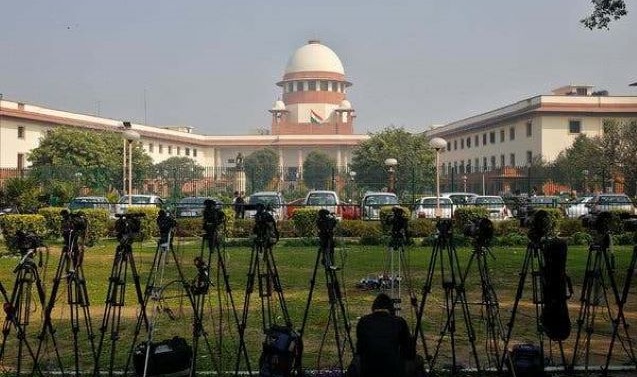 NEW DELHI – The Supreme Court on Tuesday heard a batch of petitions concerning the situation in Jammu and Kashmir which arose after the abrogation of Article 370 of the constitution.

In August, the central government had announced its decision to scrap Article 370 and bifurcate the erstwhile state into two Union Territories (UTs) — Jammu and Kashmir with legislature and Ladakh without one. Following this, phone lines and internet were blocked in the region.

Advocate Dushyant Dave, representing petitioner Paranjoy Guha Thakurta, opposed the information blockade in the region and told a bench headed by Justices N V Ramana that the internet connectivity is a fundamental right and the Central government cannot impose a ban on it.

Dave cited a judgment given by Kerala High Court in which it held that access to the Internet is a fundamental right.

“The government does not want any kind of criticism and that is why it imposed a ban on the internet so that people cannot communicate and share their views. Everybody had been silenced,” Dave said.

He submitted that none of the imposition by the Centre is genuinely levied. “It is not a bonafide and genuine imposition. Nobody really even knows what the restrictions are,” the counsel said, adding that people have a right to know.

Another counsel Meenakshi Arora, appearing for social activist Tehseen Poonawala, said that the impositions were levied by the Centre with improper reasoning and asked how it can curtail the right of one crore population.

“Without any material how can the state curtail the right of one crore population? I could have understood that for a period of 1-10 days the imposition of the blockade is there, but the kind of length till 100 days, I don’t understand it,” Arora submitted before the court.

Normalcy is gradually returning to Jammu and Kashmir as mobile and landline services have been restored in both UTs and restrictions under Section 144 on movement withdrawn or relaxed, except for night time restrictions in the Valley.

Arguments of Meenakshi remained inconclusive today and would continue in the next hearing.__Kashmir Observer