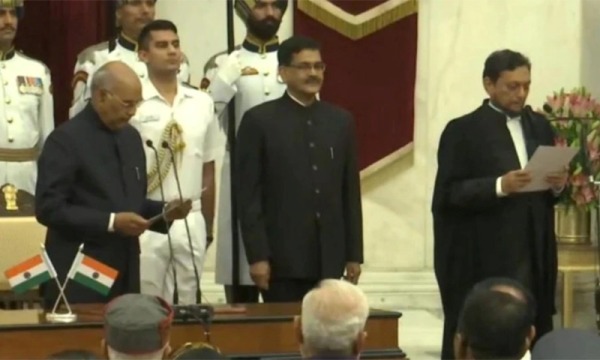 Justice Sharad Arvind Bobde was sworn in as India’s 47th Chief Justice by President Ram Nath Kovind on Monday, November 18.
In accordance with convention, the incumbent CJI Ranjan Gogoi, who retires on November 17, had recommended Justice Bobde — who is next in seniority — as his successor, in a letter to Ministry of Law and Justice. The president signed the warrant for his appointment on October 29.
Justice Bobde takes up the office soon after being part of the bench that finally ended the Ayodhya title dispute. He will continue as the 47th CJI till April 23, 2021, when he retires.
Born on April 24, 1956 in Nagpur, Maharashtra into a family of lawyers (his grandfather, father and brother are all distinguished advocates), Justice Bobde secured his BA and LLB Degrees from Nagpur University, after which he enrolled with the Bar Council of Maharashtra in 1978.
Justice SA Bobde practised at the Nagpur Bench of Bombay High Court with appearances before the principal seat in Bombay and before the Supreme Court of India, and became senior advocate in 1998.
On March 29, 2000, he was appointed as a judge of the Bombay High Court. After 12 years on the bench in his home state, he became Chief Justice of the Madhya Pradesh High Court on October 16, 2012.
On April 12, 2013, Justice Bobde was elevated as a judge of the Supreme Court of India.
The first case which saw him enter the limelight was the original Puttaswamy case in the apex court. Justice KS Puttaswamy, a retired judge of the Karnataka High Court, had filed a writ petition in the Supreme Court challenging the attempts by the Centre (ruled by the UPA at the time) to make Aadhaar mandatory for various schemes.
At the time that there was no legislative basis for Aadhaar, which was purely run on executive orders — Justice Puttaswamy argued this whole programme was unconstitutional.
In 2015, they reiterated their order after being informed government authorities were once again making Aadhaar mandatory, and once again put a stay on Aadhaar being made mandatory. As the government was insisting that the right to privacy — crucial to the case — was not a fundamental right, the two judges referred this question for hearing by a larger bench.
This led to the historic judgment of a nine-judge bench of the Supreme Court in 2017 which unanimously affirmed that privacy was a fundamental right. Justice Bobde wrote one of the opinions in the judgment, in which he recognised that privacy was a natural right, which existed in several other fundamental rights as well, including the right to free speech and the right to life and liberty.
He indicated that he believed Aadhaar was a reasonable restriction on the right to privacy — though he was not part of the bench which eventually heard the constitutional challenge to Aadhaar itself in 2018.