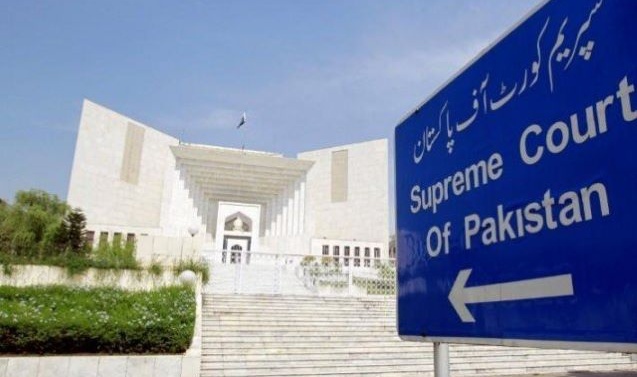 ISLAMABAD: The superior bars of Gilgit-Baltistan have filed a constitutional petition in the Supreme Court challenging the appointment of Syed Arshad Hussain Shah as chief judge of the Supreme Appellate Court G-B.

As the seven-judge larger bench, headed by Justice Gulzar Ahmad, on Thursday resumed the hearing regarding implementation of its January 17 verdict about the enforcement of legal reforms in the G-B region, the G-B Bar Council and the G-B High Court Bar Association filed the petition.

It was filed under Article 184 (3) of the Constitution through renowned lawyer Salman Akram Raja, requesting to declare the notification for the appointment of the chief judge of the Supreme Appellate Court G-B as void ab initio.

The petitioners requested the SC that the federal government be directed to make appointments at the G-B Supreme Appellate Court and the G-B Chief Court by the requirements of independence of the judiciary as laid down by the apex court.

“The Respondent Federation may also be directed to promulgate forthwith the Gilgit-Baltistan Governance Reforms, 2019 as directed by this Honorable Court through its judgment January 1,7, 2019 passed in Constitution Petition No 50 of 2018 and other connected mattes,” it is also pleaded.

It also prayed that during the pendenthe cy of petition, the notification regarding the appointmethe nt of chief judge of the Supreme Appellate Court G-B be suspended and may be restrained from work.

The petition contended that the federation failed to act in accordance with the apex court’s January 17 judgment and has delayed the promulgation of the G-B Governance Reforms.

“In the meanwhile, the Respondent Federation has sought to take advantage of its non-compliance by proceeding to appoint a chief judge of the Supreme Appellate Court Gilgit-Baltistan in a manner that violates the fundamental right of the people of Gilgit-Baltistan to an independent judiciary. The impugned appointment made through Notification of May 6, 2019 is an act of executive whim that is devoid of the minimum requirements of due process and consultation that have been laid down by this Honorable Court as essential prerequisites for the appointment of judges of the superior judiciary.”

It is also stated that the appointment of Syed Arshad Hussain Shah as chief judge of the Supreme Appellate Court G-B caused widespread concern and consternation all across the region.

“In this regard, reference is made to Joint Resolution No 137 that was adopted by the G-B Assembly on April 29, 2019. The assembly also passed an adopted Resolution No 133 dated April 8, 2019 whereby appointment of judges at the G-B Supreme Appellate Court, including the chief judge thereof, was sought in accordance with Article 175 of the Constitution of Pakistan, 1973.

The elected bodies of the G-B Bar Council and G-B High Court Bar Association also passed Resolutions on May 5, 2019 and May 9, 2019, respectively against the appointment of Syed Arshad Hussain Shah, Chief Judge Supreme Appellate Court Gilgit-Baltistan,” stated the petition.

It is also stated that the rights of the people of G-B, who are citizens of Pakistan, assured by Articles 9 and 175 of the Constitution stand violated and denied by this appointment.

Additional Attorney General Sajid Ilyas Bhatti requested the bench to grant time as the matter related to the enforcement of reforms was being considered by the National Security Committee.

The bench urged the executive authorities to consider the matter in view of the prevailing political situation. The hearing of the case was adjourned for an indefinite period.__Tribune.com