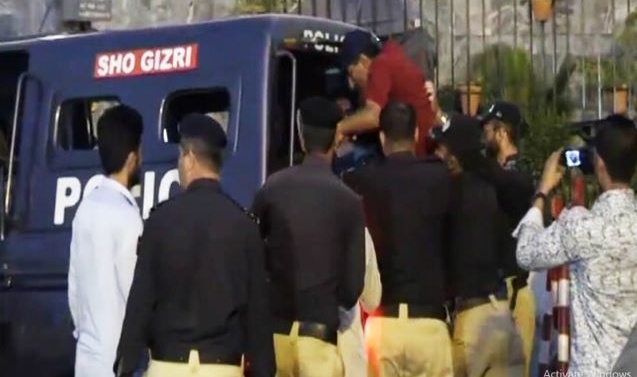 KARACHI: Forty-seven government college professors and lecturers were booked and detained by police after they staged a sit-in near Chief Minister’s House in Karachi on Wednesday which caused a major disruption in the flow of traffic, police officials said.

According to SSP South Sheeraz Nazeer, 44 male and 3 female teachers have been booked and shifted to various police stations.

The professors were protesting against a delay in their time-scale promotion. They claimed that a summary for the fulfilment of their demands had been approved by the then Sindh chief minister, Syed Qaim Ali Shah, but had yet to be implemented, compelling them to stage a sit-in.

As part of a Sindh-wide protest, around 200-250 professors participated in the protest held on Dr ZIauddin Ahmed Road. The protest call had been issued by the Sindh Professors and Lecturers Association (SPLA).

The police authorities held talks with the protesters to vacate the area but they allegedly refused to do so, according to a police officer. Protest rallies have been banned in the city’s ‘Red Zone’ where the protest had taken place.

“We took the action of arresting them to get the road cleared for traffic,” said the police official.

The police arrested them after they offered Maghrib prayers, said the official, adding that the police did not resort to baton charges, tear gas shelling or the use of water cannons.

The SPLA announced a province-wide boycott of academic activities on Thursday against the police action and detention of their colleagues. Professors will wear black armbands in protest, according to a statement issued by the SPLA.

Earlier, the ‘coordination committee for time-scale’ of the SPLA had gathered outside Karachi Press Club and held a meeting of their general body led by professor Anwar Mansoor.

After the meeting, as the professors tried to move towards Chief Minister’s House, contingents of police tried to prevent them from moving forward. However, the protesters managed to reach the ‘Red Zone’ and staged a sit-in at PIDC House.

Addressing the crowd of protestors, many professors observed that “in a democratic era, Sindh’s lecturers and professors have been subjected to an undesirable attitude by the police and the provincial government.”

The SPLA office-bearers, in their address, recalled that hundreds of thousands of school teachers had been given time-scale promotions in 2010 but that college lecturers and professors have been deprived of their legitimate demand for the same.

They vowed to continue their protest till the issuance of a notification to this effect.

Later, the SPLA in a statement claimed that contingents of police stormed their protest at Magrib prayer and arrested “several professors and lecturers” who were offering prayers and “tortured” them.

According to the press release, some of the professors detained by the law enforcers include Anwar Mansoor, Abdul Jabbar, Malook, Benazir Junejo, Lala Rukh Baloch, Zakia, Rahila Memon, and Maria Abro.

After the arrest of their colleagues, the remaining teachers returned to the KPC where they staged a sit-in and vowed to continue their protest till the fulfilment of their demands.

The Sindh College Education Department issued a statement, regretting the “huge inconvenience caused to the general public” and the creation of an “unpleasant situation unbecoming of teachers”.

The department noted that the protest was held “in disregard of Section 144 put in place for Chup Tazia” and that it “blocked main roads in district South in violation of general restrictions in place at the Red Zone”.

According to the statement, the Sindh High court has already been hearing the time-scale promotion case since 2017 and the Sindh government has been made a party in the case. “The last hearing of the case was held on November 1, 2019 when the High Court fixed the next hearing for November 15 and asked the College Education Department to submit details of promotions given to college teachers since 2017,” said the statement.

The department, in its statement observed that the government “has been giving regular promotions to college teachers” in spite of the consistently “poor examination results of government colleges” owing to the “below-par” performance of the teaching staff.

The statement also recalled that the teachers had earlier been reminded that the matter was sub-judice and that they must await the outcome of the case.

The college education department expressed its “disappointment at the anti-education activities of such individuals and groups” while assuring “education-friendly teachers of its full support in meeting their genuine needs and demands in the interest of quality education in Sindh”.__Dawn.com