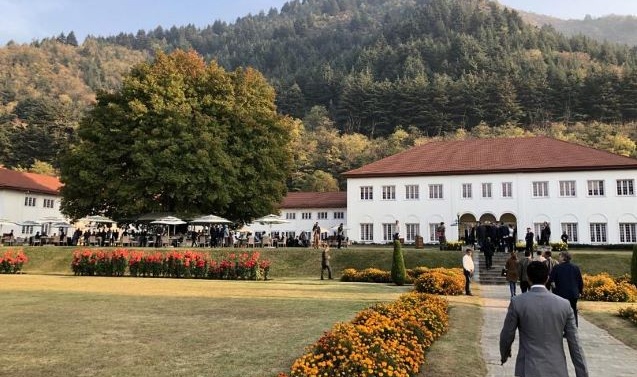 Who would you imagine the first delegation would be to enter Indian administered Kashmir after last August’s shutdown? The UN? The Red Cross? How about a cross-party group of Indian officials?

Well, Euronews has discovered it is actually a group of EU parliamentarians.

The MEPs were invited on an unofficial visit to the region and to meet with India’s PM Narendra Modi.

Their trip gathered criticism with claims of a highly choreographed PR stunt, and a lack of transparency into how the visit was organised and who paid for it.

To make sense of this, Euronews spoke to one of the MEPs on the trip.

“We MEPs, were the first outsiders. We were told, if you’ll excuse the expression, the first white people allowed in since the Modi changes made in August,” UK Lib Dem MEP Bill Newton Dunn told Euronews.

Newton Dunn was sent an invitation to take part in the trip via email in early October. He was one of 23 MEPs who made their way to the disputed region.

Kashmir is one of the most politically sensitive places in the world, and has long been a flashpoint between two nuclear-armed neighbours, India and Pakistan.

In August, the Indian government revoked Indian-administered Kashmir’s special status, which had so far given the contested region political autonomy. Since then, Kashmir has been effectively shut down.

“I think the reason why we were admitted, and told to go and have a look and see what you think is because the reaction has been positive and they felt safe to let people inside,” said Newton Dunn when asked why it would be appropriate to invite a group of European parliamentarians to Kashmir.

Newton Dunn said that they drove through Srinagar for “half an hour or so” and said that the shops were open. He doesn’t believe it was for show. ”We just raced past,” he said.

The MEPs then had lunch at the Indian Army Headquarters, where they were shown a map of what they called terrorist training camps inside Pakistan, “which are used to attack the citizens of Kashmir.”

Newton Dunn said that the military told him, “everything was fine and they were very proud to tell us that not a single person had been killed in Indian Kashmir since the Modi announcement of the change in the Constitution in August.”

The delegation then went to a ‘civil society’ meeting on the grounds of a “magnificent, great hotel”. Newton Dunn described it as a “lovely, sunny afternoon” where they met “a couple of hundred leaders of civic society who we were free to talk to and they were free to talk to us – anything they wanted to say.”

He noted that it was “a large enough sample size,” and that it was unlikely that those in attendance were “hand-picked”.

However, the Editor of the Kashmir Times, Anuradha Bhasin, told Euronews that, at a local level, “there was no knowledge of any meeting with civil society groups.”

How shut down is the shutdown?
NetBlocks – who monitor internet connectivity worldwide – paint a bleak picture of communication possibilities in the region.

”Network data shows that Kashmir remains offline and largely out of touch as the telecommunication blackout is in its twelfth week,” said Alp Toker, the organisations’ director.

Interestingly, further data indicates that modest internet connectivity actually returned to Srinagar from 10 a.m. on Monday – the day before MEPs arrived. Although Toker notes the increase only amounted to 1/6 of normal connectivity levels.

On this issue, Newton Dunn said he was “checking my emails and using my phone in the hotel in Srinagar”.

How was the trip organised?

To understand how the trip was organised, we contacted Chris Davies, another Liberal Democrat MEP. Davies was initially invited on the trip by Madi Sharma, director of the Brussels based Women’s Economic and Social Think Tank (WESTT), on October 7. As of writing, it is unclear who funds WESTT.

Sharma began her email to the MEPs stating her group was “organising a prestigious VIP meeting with the Prime Minister of India, His Excellency Narendra Modi.” She went on to say that “he would like to meet influential decision-makers from the European Union”.

Although WESTT was organising the 4-day trip, another organisation – the International Institute for Non-Aligned Studies (IINS) – funded it.

Sharma’s email did not state the connection between her think tank, IINS, and the Indian government.

When he was invited, Davies requested that he be allowed to talk to people without the presence of the military or minders. Two days later, Sharma told Davies that the trip was full. He had effectively been disinvited.

“From the very first moment, the visit sounded to me like a PR stunt intended to bolster Narendra Modi. I think the actions of the government of India in Kashmir are betraying the best principles of a great democracy, and I believe the less notice that the rest of the world pays to the situation the more pleased they will be,” Davies told Euronews.

IINS describes itself as a “platform for the billions of people of the Third World to voice their opinions and be heard with equal value”. It has access to the highest level of consultative status with the United Nations Economic and Social Council.

IINS is a part of a wider umbrella organisation known as the Srivastava Group. That group is involved in a range of businesses around the world, from media to mining. Their Brussels address matches that of the publication, EP Today, whose website has republished numerous articles from Russia Today. Euronews also noted a number of anti-Pakistan articles on EP Today’s site.

The New Delhi based newspaper, the New Dehli Times, is listed as belonging to the Srivastava Group, however. It has 188,000 followers on Twitter. A number of people who were on the MEP trip to Kashmir have written for this newspaper as well as EP Today, including the organiser of the visit, Madi Sharma of WESTT.

Sharma is also listed as the New Dehli Times’ EU Correspondent and has written numerous articles for both publications.

Another man seen in pictures with Modi and Sharma, during the visit, is Henri Malosse, the former President of the European Economic and Social Committee. Malosse, too, has numerous articles attributed to him on EP Today, including a piece titled “Fundamentalism is at the root of Evil in Pakistan”.

Ryszard Czarnecki, a Polish MEP, part of the European Conservatives and Reformists Group, who was on this India trip, has also written for both EP Today and New Delhi Times. One of his articles dated September 5 this year, is titled “Kashmir – India’s fight against terrorism”.

The ‘Transparency Register’ and is it actually transparent?

In her initial invite to MEPs, Sharma noted that her think tank is listed on the ‘Transparency Register’. What is that?

The Transparency Register is the European Commission and EU Parliament’s attempt at bringing transparency to lobbying in Brussels. In order to lobby parliamentarians and commissioners, organisations and individuals must sign up to the register, and obtain a lobby badge. What you need to sign up includes an estimated budget, an address, and a statement on what you are interested in lobbying for. No official documents are necessary.

The register is not legally binding, and according to the European Parliament, it remains a “de-facto’’ mandatory register.

‘No control on entries’

In the case of the Kashmir trip, there is nothing on the lobby register with regards to who was involved, and what the trip entailed. There is no centralised database within the register that compiles third-party funded travel.

Speaking to Euronews, Vitor Teixiera of Transparency International EU said that the list is “voluntary, there are no sanctions and almost no control on entries, with the quality of entries on the register being very poor”.

But for Teixiera, the Brussels lobbying system and loopholes in the register leave MEPs vulnerable.