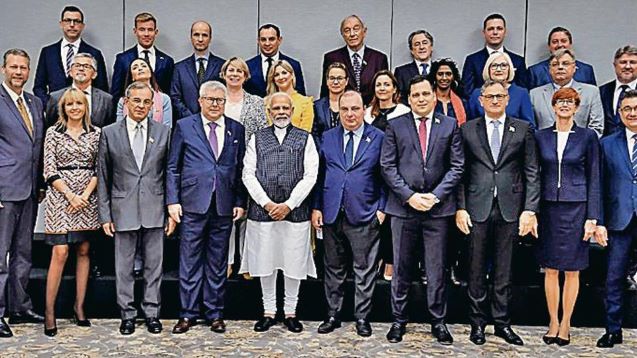 The Narendra Modi government has agreed to host 23 members of the European Parliament, currently on a visit to India, in the Kashmir Valley on Tuesday so they can see first-hand the ground situation in the region after the nullification of Article 370, which gave Jammu & Kashmir special status.

This will be the first visit by any international delegation to the Valley after August 5, when Indian Parliament passed resolutions and laws to split Jammu & Kashmir into two Union territories, and scrap special status to the state and special privileges to its residents. This was followed by communication curbs and other restrictions in the Valley, some of which have since been lifted. Many local political leaders were also detained following the move. On Monday, 27 MPs from the European Parliament met Prime Minister Narendra Modi at his Lok Kalyan Marg residence. They were also briefed by National Security Adviser Ajit Doval, who pointed out that Article 370 was always of a temporary nature and that Pakistan did not object to J&K’s inclusion as a state of the Indian Union.

Modi explained to the MPs that India’s main objective in making legislative changes concerning Jammu & Kashmir was to achieve peace and ensure development in the region. He also stressed the importance of zero-tolerance towards terrorism, and asked for urgent action for all supporters of terrorism. The Prime Minister did not name Pakistan, which has served as a base for several terrorist groups operating in Jammu & Kashmir. Pakistan has also sought to internationalise the Kashmir issue, which, Indian maintains, is an internal matter.

The 27 MPs were then briefed by Doval for around 40 minutes on the situation in Jammu & Kashmir. He told them that the restrictions put in place after August 5 were necessary to ensure there were no attacks by the Pakistan-based terror groups. Doval’s detailed briefing also countered Pakistan’s contention of a genocide-like situation in the Valley.

While most foreign nations have not bought into Prime Minister Imran Khan’s narrative, they have expressed concern over continued restrictions in Jammu & Kashmir. Last Thursday, for instance, the US said while it has seen “progress” in Kashmir, it remained “deeply concerned” about the situation and would like India to release detainees and produce a “road map” on the restoration of economic and political normalcy.

It also said Pakistan-based terrorist groups such as Lashkar-e-Taiba and Jaish-e-Mohammad are a “problem” as regards the situation in Kashmir, and the Khan government needs to follow it promises with action.

BN Dunn, one of the parliamentarians who met the PM told news agency ANI that Modi briefed the delegation on the nullification of Article 370, but that he wanted “to see on the ground, how it actually is and talk to some local people”. “What we want is normalcy and peace for everyone,” he added.

In his briefing, Doval said there were now no restrictions on movement; that all land lines and mobile phones were operational; and that all hospitals were functioning. Of the 27 members, 23 will leave for Srinagar on Tuesday and spend two days in the region, meeting civilians, local journalists, and officials of the state administration. They will also be given a tour of Srinagar. Jammu & Kashmir will be broken up into two Union Territories on October 31.

Iltija Mufti, the daughter of former chief minister Mehbooba Mufti, and who now handles her mother Twitter account, posted: “Hope they get a chance to speak to the people, local media, doctors and civil society members. The iron curtain between Kashmir & the world needs to be lifted and GOI must be held accountable for pushing J&K into turmoil.”

Mehbooba Mufti, the head of the Peoples Democratic Party (PDP), and several other leaders of political parties in the region (including former chief ministers Omar Abdullah and his father Farooq Abdullah) have been in detention since August 6. The senior Abdullah has been arrested under the Public Safety Act. On Monday, over lunch, the visiting European Parliament members met around 40 Kashmiri politicians, political activists, and intellectuals, including PDP leaders Muzaffar Beig and Altaf Bukhari, and the chairman of the All J &K Panchayat Conference, Shafiz Mir.

Even as the Modi government is sending the European parliamentarians to the Valley, it has adopted a focused approach on countering Pakistani diplomatic bombardment on the nullification of Article 370 on global platforms. India is convinced that Pakistan will keep on piling pressure diplomatic pressure on India globally, while its Army will do its utmost to orchestrate violence in the Valley. Last weekend, in response to increased shelling by Pakistani troops – it was aimed at helping terrorists infiltrate into India, Indian security officials said – Indian artillery fire targeted launch pads for terrorists across the Line of Control, killing several terrorists.

During his brief interaction with the MEPs, PM Modi also told them that early conclusion of a fair and balanced Bilateral Trade and Investment Agreement (BTIA) with European Union was a priority of his government.__Hindustan Times