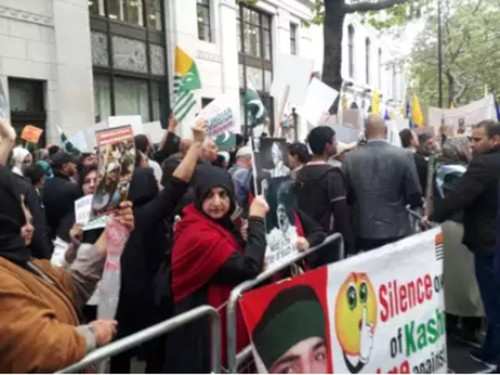 LONDON: Barred from holding a “free-Kashmir” rally outside the Indian High Commission here on Diwali, Pakistani and Kashmiri groups have initiated legal action to get the decision overturned. Metropolitan Policeon Wednesday imposed pre-event conditions on the protest under Sections 12 and 14 of the Public Order Act 1986, banning the groups from gathering outside India House before or after the march, or including it in their route. “The route of the procession must go from Parliament Street to Whitehall to Trafalgar Square. Failure to adhere to these conditions may lead to arrest and prosecution,” the notice states, adding that the conditions have been imposed to “prevent serious disruption to the community”.
Mirpur-born Raja Fahim Kayani, president of the Tehreek E Kashmir UK and coordinator of the protests, told TOI: “On Thursday,
we personally delivered a group letter under the pre-action protocol required for judicial review to the office of the commissioner of Metropolitan Police, Cressida Dick, regarding her decision to impose conditions on the march.” If the commissioner refuses to reverse her decision, a judicial review claim would be filed in the high court on Friday. “We need
to have a proper answer as to why they turned it down. We are peaceful protesters. Nothing happened on August 15. 40k people demonstrated peacefully. There were just a few arrests,” Kayani said.
London mayor Sadiq Khan had last week called for those organising the march and everyone else considering taking part in it to cancel their plans “to prevent a repeat of the totally unacceptable violence, aggression and hostility from some protestors” at similar protests there on August 15 and September 3. He apparently stepped in after receiving several letters from the British Indian community. The high commission had also put forward its security concerns to Metropolitan Police in a bid to get the location shifted.
A spokesman for the Indian High Commission told TOI: “We have had verbal confirmation from the police that we have got it cancelled, as in they will not be allowed to enter the area around India House. However, the march can still go ahead from Downing Street and end up in Trafalgar Square.” Other groups that received the police notice include the Pakistan Patriotic Front, World Muslim Federation, Muslim Action Forum, Overseas Pakistan Welfare Council, Jammu Kashmir National Awami Party