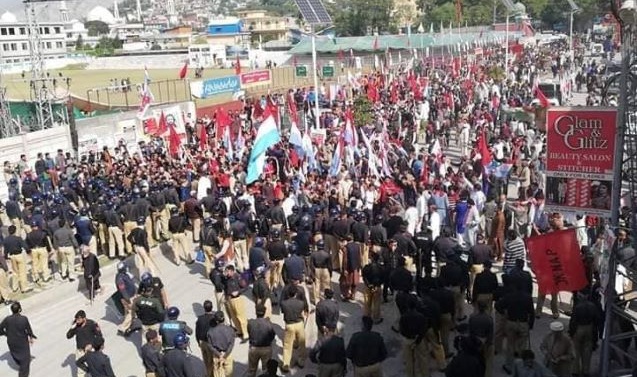 On a day Islamabad took a small group of foreign diplomats to selected areas of Pakistan-occupied Kashmir in its campaign against India, two civilians died and many were injured in police action to disperse a pro-freedom rally in Muzaffarabad, according to news agency ANI. According to reports, the rally was organised to observe a “black day” by parties in PoK and Gilgit Baltistan on the anniversary of Pakistan’s move in 1947 to invade Kashmir.

In videos of the protest and the police action that emerged on social media, a protestor said they had planned to carry out a peaceful protest to mark the day.

“We have planned peaceful protest to mark the day, albeit if the administration shows any aggressiveness, we are willing to go to any extent to have our voices heard,” he said. The main protest in Muzaffarabad was held under the banner of All independent parties alliance.

Tuesday’s protests, however, coincided with an effort by Prime Minister Imran Khan’s government to counter Indian army’s assertion that it had destroyed terror camps in Pakistan-occupied Kashmir in cross-border firing.

According to reports in Pakistan media, the diplomats were taken to selected locations.

“The diplomats were taken to the Nauseri, Shahkot and Jura sectors near the LoC, as well as the Nausada village, which has suffered severe damage in attacks by Indian troops. The trip was arranged so that they can verify for themselves the claims made by Indian army chief General Bipin Rawat,” Pakistan’s foreign office spokesperson Mohammad Faisal said, according to news agency IANS.

Inter-Services Public Relations Director Major General Asif Ghafoor said the diplomats and media persons were shown remains of the artillery shells that Pakistan claims were fired by the Indian troops from across the LoC.__Hindustan Times