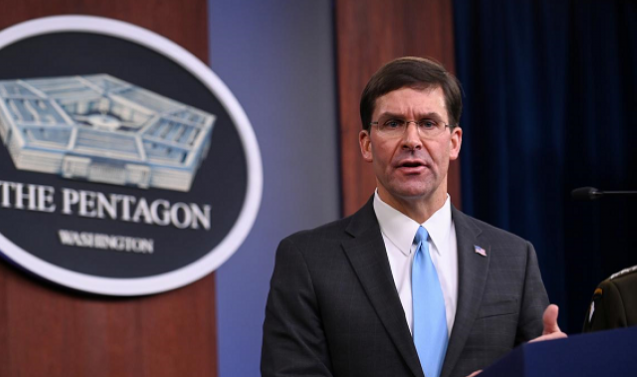 KABUL: US Defense Secretary Mark Esper arrived in Afghanistan on Sunday in a bid to bring talks with the Taliban back on track after President Donald Trump abruptly broke off negotiations last month seeking to end the United States’ longest war.

Esper’s trip to Kabul comes amid questions about the United States’ commitments to allies after a sudden withdrawal of US troops from northeastern Syria and Trump’s long-time desire to get out of foreign engagements.

“The aim is to still get a peace agreement at some point, a political agreement. That is the best way forward,” Esper told reporters traveling with him to Afghanistan. He is due to meet President Ashraf Ghani and US troops while in Afghanistan.

“I hope we can move forward and come up with a political agreement that meets our ends and meets the goals we want to achieve,” Esper said, adding that talks were in the State Department’s domain.

He added that the United States could go down to about 8,600 troops, from the current 14,000, without affecting counter-terrorism operations, if needed.

Trump halted talks with the Taliban, aimed at striking a deal for US and other foreign troops to withdraw in exchange for Taliban security guarantees, after it carried out a bomb attack in Kabul last month that killed 12 people, including a US soldier.

The United States says it has increased the pace of operations against militants in Afghanistan since Trump walked away from talks with the Taliban.

“US policy in Afghanistan is so confused right now because on the one hand we’re hearing the messaging from Washington and particularly Trump about our endless wars, that it could be time to leave sooner or later,” said Michael Kugelman, senior associate for South Asia at the Wilson Center think-tank.

“On the other hand, you have US military forces stepping up their pressure on the Taliban in more intense ways than ever before,” Kugelman said.

A Taliban delegation met US special representative for Afghanistan Zalmay Khalilzad for more than an hour in Pakistan this month, though officials said it did not represent a resumption of formal negotiations.

Some US officials believed Khalilzad would resign after Trump ended talks with the Taliban.

One US official, speaking on condition of anonymity, said that after Trump’s sudden announcement that the United States would withdraw all its troops from northern Syria last week, there was more of a realisation that Trump was serious about withdrawing from Afghanistan as well.__Tribune.com