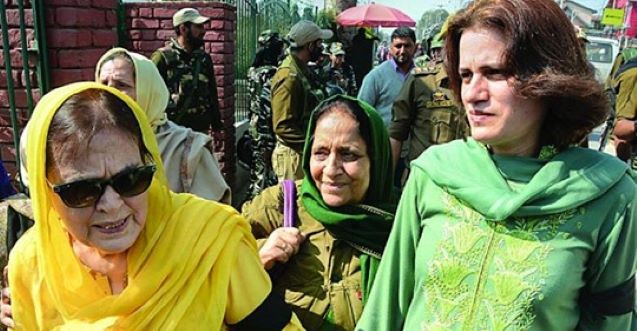 SRINAGAR: Incarcerated NC President, Dr Farooq Abdullah’s daughter and sister were among over a dozen women, also prominent civil society members, arrested by the police today during their protest to press for the restoration of special status of J&K and release of political leaders.

Protest was organized by Kashmiri women including many prominent educationists and doctors against what they called unilateral decision taken by the centre to revoke Articles 370 and 35A and subsequent split of the state into two union territories.

Wearing black bands on arms and holding placards which read “respect fundamental rights, release all detainees and our voice is the future” the protesting women appeared at Pratap Park this morning and held protest against Centre’s August 5 decision to annul provisions of Article 370 and bifurcation of state into two union territories.

As soon as the protesting women including sister and daughter of incarcerated NC President, Dr Farooq Abdullah tried to move on the main road, contingents of women CRPF deployed in advance bundled them into police vehicles and detained them at police station Kothibagh. Suraiya Mattoo is also a prominent civil society member. She has been a college teacher and retired as Women’s College principal and since then she has been engaged in several civil society initiatives.

An overwhelming majority of about the dozen detained women are senior citizens. Besides, they include prominent civil society members and academic were detained at a time valleys reels under uncertainty after centre abrogated special status of Jammu and Kashmir.

While Farooq undergoes detention under Public safety Act (PSA) at his Gupkar residence, Omar Abdullah is detained at Karan Mahal and Mehbooba Mufti at Chashma Shahi.

“We have assembled here to protest unilateral decision of the government of India and the events occurred post August 5. What does India wants to convey by snatching away our identification and detaining political leaders,” said Suraiya Mattoo, sister of Farooq Abdullah before being detained.

Safiya Farooq who happens to be the daughter of incarcerated NC leaders Farooq Abdullah and sister of Omar Abdullah was also detained by the police.

The statement issued by the women stated that they disapprove of unilateral decision taken by the Government of India to revoke Articles 370 and 35A and downgrade and spilt state of Jammu and Kashmir.

“We feel betrayed, humiliated and violated as people and demand restoration of civil liberties and fundamental rights of citizens. We also demand demilitarization of rural and urban areas besides unconditional release of all detainees,” statement added.

They also tried to stop them from distributing a statement to the media covering the protest.

Before being pushed into the police van, Omar Abdullah’s sister Suraiya said, “Look how these people are treating women. Then they say that the situation here is normal. Is this normal?”

Social activist Qurrat-ul-Ain also criticized the police action, saying, “India has left Kashmir at the mercy of the situation.” She maintained, “We’re getting in here and saying that everything is normal.” The protesters were carrying placards inscribed with slogan “Kashmiri brides are not for sale”, “Respect Fundamental Rights”, “Why downgrade Jammu and Kashmir” and “Stop lying to the nation.” An agency report said that another woman, New Delhi-based activist Sushobha Barve, also was arrested.

Detainees must be immediately released and demilitarisation of rural and urban areas must be ended, they also demanded.

“We express our outrage against the national media for their false/misleading coverage of ground realities in Kashmir,” they added.__Kashmir Times