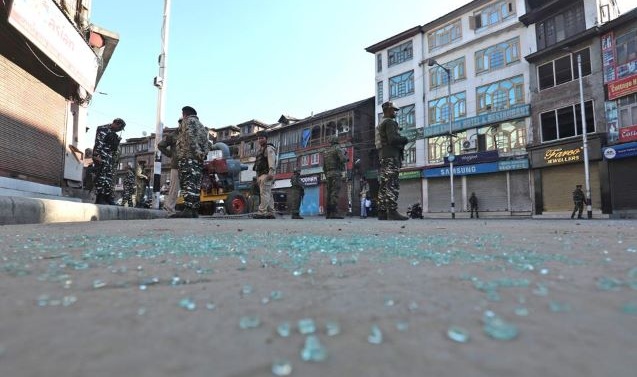 At least eight people including a woman were injured in a grenade attack by suspected militants in a market place in Jammu and Kashmir’s Srinagar on Saturday, police officials said.

This is the third incident of its kind in Kashmir valley since the state’s special status was revoked in Parliament and restrictions imposed on the movement of people on August 5.

Officials said that suspected militants lobbed a grenade in Hari Singh High Street which exploded on the roadside, a few hundred metres from Lal Chowk. The place is also close to the civil secretariat and the state assembly. As shops remain shut these days owing to the shutdown, the area is full of cart vendors selling fruits and second-hand clothes.

“Seven people have been injured which includes a woman,” said deputy inspector general of police (DIG), Central Kashmir, Vidhi Kumar Birdhi. He later revised the figure to eight people who had been injured.

He said that the woman had a splinter injury on her head. “She has been sent for a CT scan to know how grave the injury is,” he added.

The officer said that the attack was the work of militants. “Who else will do it other than militants? There is normal movement of people in the area. The security forces also remain deployed there,” he said.

The attack created chaos in the area and people ran for cover. Window panes of a vehicle parked on the roadside near the site was also damaged.

Security forces immediately cordoned off the area to look for the attackers and then allowed private transport to resume in a regulated manner.

“We have been working on some leads to identify the attackers,” he said.

On October 5, at least 14 people including two women and a traffic policeman were injured in a grenade attack in south Kashmir’s Anantnag district. According to police officials, suspected militants had lobbed a grenade near the Anantnag deputy commissioner’s office which exploded on the roadside.

Last month, CRPF had claimed that its men on law and order duty in Old City Srinagar were targeted with a grenade which did not cause any damage.

According to police officials since the revocation of Article 370, suspected militants have killed three civilians in the valley in August including two shepherds in south Kashmir’s Tral and a 60-year-old shopkeeper in Srinagar city’s Parimpora. Four people including a minor girl were injured after gunmen opened fire on a trader’s family in north Kashmir Sopore on September 6.

Government spokesman Rohit Kansal said that some killings and injuries have been inflicted by terrorists including on a baby to “prevent” traders, businessmen and transporters from doing their normal business.

“The government urges businessmen, industrialists, traders, transporters, shopkeepers, hoteliers and contractors not to be frightened by any threats by terrorists, separatists and go about their normal activities. The government is firm in its resolve that the attempts of these disruptive elements will be foiled,” he said.

The government is restoring postpaid mobile phones from Monday in Kashmir which has been reeling under a communication blockade since August 5. Although the restrictions have been eased in Kashmir but internet services in the valley are still blocked.

Amid the uncertain situation since the abrogation of Article 370, four gunfights between militants and security forces have also taken place in Kashmir in which six militants have been killed.

On October 8, two LeT militants were killed in a gunfight by security forces in south Kashmir’s Pulwama district.

At-least two militants were killed after security forces launched an operation in the forests of central Kashmir’s Ganderbal district on September 28 which continued for many days. Earlier National Security Advisor Ajit Doval had asked security agencies to intensify anti-militancy operations after reports of increase in infiltration attempts.

On September 11, security forces claimed to have killed a militant who was alleged to be involved in an attack on a fruit trader of Sopore in which four people including a minor girl were injured.__Hindustan Times