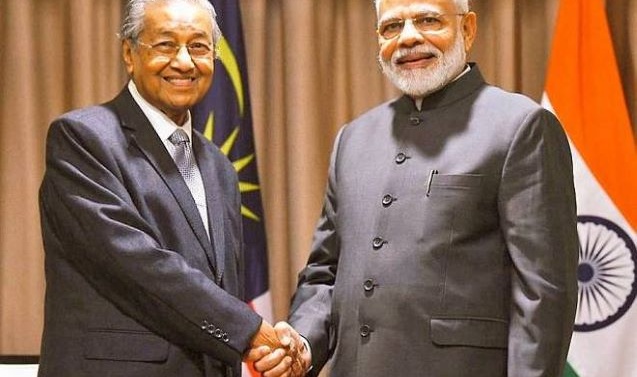 Days after India asked the Malaysian government to desist from commenting on the Kashmir issue, Prime Minister Mahathir Mohamad defended his remarks that were critical of India and said he had told Prime Minister Narendra Modi the same thing at their last meeting.

Speaking at the UN General Assembly in September, Mahathir had said that Jammu and Kashmir had been “invaded and occupied”, and that India’s action in the state was “wrong”.

India’s external affairs ministry spokesperson had on Friday said the developments in Jammu and Kashmir are a “purely internal matter”, and that Malaysia should keep in mind friendly relations between the two countries and “desist from making such remarks”.

Interacting with reporters in the Malaysian Parliament on Tuesday, Mahathir defended his comments on Kashmir, which were critical of India, at the UN General Assembly. He also said his remarks were an extension of his conversation with Modi when the two leaders met on the margins of the Eastern Economic Summit in Russia in September, according to reports in the Malaysian media.

Malaysia, he said, is not taking sides in the matter. “We must know how to manage this problem… (and) our criticism does not side with anyone,” Mahathir was quoted as saying by the Malaysian media.

“When we make remarks, we are not targeting specifically anyone but we only want both parties to negotiate and not resort to violence,” he added.

Mahathir further said: “Just demanding that both parties negotiate and not use violence. That has always been our policy. Do not use violence and instead, negotiate, or go for arbitration or go to the court of law.”

He added, “This is what I raised to Modi, when I met him at Vladivostok, and my speech (at the UN General Assembly) is an extension of our stand, that we do not want to see violence erupt. Instead, any dispute, conflict among nations must be settled via negotiation, arbitration or court of law.”

Mahathir acknowledged his remarks could be viewed negatively by the country that was criticised. He replied in the negative when he was asked if he expected any repercussions for Malaysia’s trade with India.

“I have already spoken to Modi. If there are any unsatisfactory feelings within Modi, he can contact me, but to date, no calls,” he said in response to a question on whether India had expressed any displeasure with him.

He was asked to comment on the possible repercussions of the #BoycottMalaysia hashtag, which began after Mahathir referred to Kashmir in his speech at the UN.

India has strongly criticised comments by the leadership of Malaysia and Turkey on the Kashmir issue, which were made after New Delhi revoked Jammu and Kashmir’s special status on August 5 and reorganised the state into two union territories.__Hindustan Times