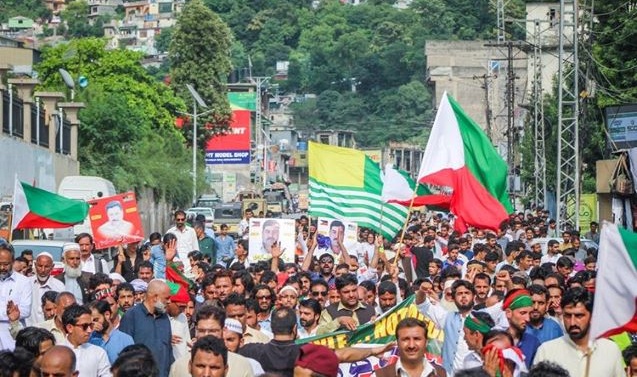 Azad Jammu and Kashmir (AJK) Prime Minister Raja Farooq Haider on Tuesday urged the Jammu Kashmir Liberation Front (JKLF) led marchers to call off their march as the purpose of their programme had been greatly met.

The JKLF led march had come to a halt some eight kilometres before the Line of Control (LoC) in Chakothi sector on Sunday due to the blockade of Muzaffarabad-Srinagar road at the hands of the administration.

Ever since then, the marchers had been staging a sit-in under large tents, erected on the main road before the blockade on Sunday night.

On Monday, JKLF leaders had renewed their appeal to the AJK government to remove the obstacles and allow the marchers to cross the ceasefire line (LoC) or else they would continue their sit-in at this place for “an indefinite period.”

As an alternative, the JKLF had demanded of the AJK government to bring any special representative of the UN Secretary General as well as representatives of the P5 members of Security Council to whom they could present their charter of demands.

In his cautious response, Prime Minister Haider said: “Those who have gone there [towards LoC] are our brothers. They have succeeded in letting the world know what they wanted it to know. I hope they will return after they have shown their resolve and commitment to the whole world.”

“Such things [march towards the LoC] would continue to happen repeatedly. Eventually, this ill-omened bloody line has to vanish, either in a peaceful way or otherwise. People should make preparations for it from now on,” he said.

“God willing this is bound to happen, sooner or later,” he added.

Haider stressed that there should not be any conceptual chaos in the ranks of Kashmiris.

“We all should raise one slogan and make one demand, that is, plebiscite,” he said.

He emphasised that all those things that lead to division in the society should be avoided to achieve the ultimate target of freedom from India.

Meanwhile, leaders from different political parties, representatives of the legal fraternity, students, and traders visited the JKLF sit-in camp on Tuesday to express solidarity with them.

Many people came up with quilts and blankets for the marchers without publicising their act on social media, a witness told Dawn.

Though officially there was no word on it, well placed official sources however maintained that “fulfilment of these demands was far beyond the authority of the AJK government.”

“This is something the JKLF itself knows very well,” they remarked, while requesting anonymity.

However, JKLF chief spokesperson Rafiq Dar did not agree with this contention.

Talking to Dawn from the sit-in camp, he maintained that the AJK government could write to the Foreign Office to take up this issue with the UN Secretary General with a request to dispatch his special representative to Chinari in view of the “seriousness of the situation.”

“They claim they head the government of the base camp [launch pad] of freedom struggle. If they are unable to do even this small step, then they should let us move forward,” he said.

“Let me tell you everyone of us is determined, rather eager, to go across the divide.”__Dawn.com