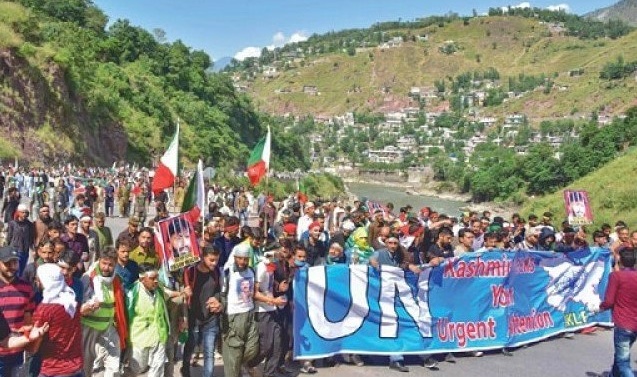 Earlier in the day, the protesters resumed their Freedom March towards the Line of Control (LoC) from Garhi Dupatta, some 21km away from Muzaffarabad – the capital city of Azad Jammu and Kashmir (AJK).

Hundreds of AJK policemen have also been deployed along with containers in Jiskool, a village located 8km ahead of Chinari, to stop the movement of vehicles and people towards Chinari and Chakothi areas of LoC.

Prime Minister Imran Khan on Saturday again cautioned the people of AJK against crossing the LoC to support the struggle of the people of Indian Occupied Kashmir (IOK).

The rally was headed by three prominent leaders of JKLF – Dr Taqeer Gilani, central spokesperson for the JKLF Rafiq Dar and Saleem Haroon – who are with the demonstrators since Friday.

On Friday, the marchers had come from various parts of AJK and spent the night in Upper Adda. On Saturday, people from different walks of life had also joined the march towards Chakothi while chanting pro-freedom and anti-India slogans.

“We are unarmed and want to cross the LoC to help our brothers who have been put under lockdown since August 5 by the government of India,” Dar said.

“We do not accept the Line of Control (LoC) which divides people of Kashmir and now we want to appeal the world community to step forward and support us to settle the Kashmir dispute once for all and make this ceasefire line irrelevant for the people of both sides of Kashmir,” he added.

The spokesperson also said, “We demand the United Nations to send its peace keeping troops to Kashmir.”

Salim Haroon, another leader of the Freedom March, raised the question that how many more days “we will wait to see our brothers dying in IOJK&L”.

“There are more than dozens of resolutions of the United Nations on Kashmir but why they not are implemented.” He said.

Haroon added: “We have been forced to start this march by the silence of world powers which are not coming forward to settle the Kashmir dispute as per the wishes of Kashmiris.”

The JKLF leader said that they will continue the protest until they are allowed access to LoC.__Tribune.com