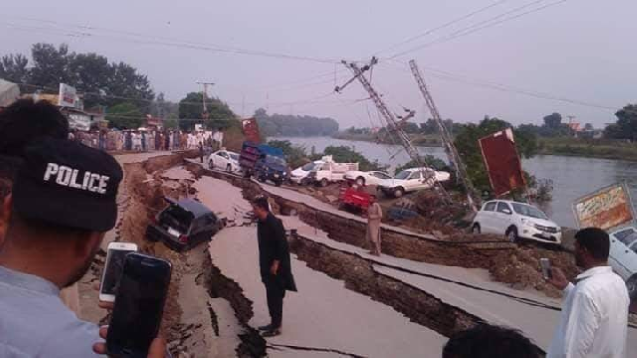 MUZAFFARABAD: An earthquake of magnitude 5.6 shook several cities on Tuesday, killing at least 30 people and injuring 452 others, government officials said.

“At least 30 people have been killed and more than 300 wounded, according to an official at the Azad Jammu and Kashmir’s State Disaster Management Authority.

Sources in the National Disaster Management Authority (NDMA), however, confirmed that at least 21 people lost their lives while 452 others sustained injuries.

The epicentre of the shallow 5.6-magnitude quake was roughly 20 kilometres (12 miles) north of Jhelum, Punjab, according to revised data released by the US Geological Survey.

Earlier, it had put the magnitude at 5.8.

The quake sent people racing out of buildings and offices in cities across the country.

AJK Prime Minister Raja Farooq Haider said the injured were being treated in a Mirpur hospital, adding that relief efforts were ongoing.

“Our whole concentration right now is to accelerate the rescue operation,” he told a private TV channel. “There are people who are stuck there and who need immediate help. We are putting in all our resources to get people the best of our help.”

“The (most) damage is in areas between Jhelum and Mirpur,” said the chief of NDMA Lt General Mohammad Afzal.

“The earthquake was 10 kilometres deep and was felt in most of Punjab, some parts of Khyber-Pakhtunkhwa. The worst hit was Mirpur, Azad Kashmir,” chief meteorologist Muhammad Riaz said.

Punjab Chief Minister Usman Buzdar imposed emergency in Jhelum, directing the authorities concerned to stay alert to cope up with the situation.

In a tweet, he said district commissioner had been directed to visit and dispatch the medical aid to the affected areas.

Army chief General Qamar Javed Bajwa directed an immediate rescue operation in aid of the civil administration for those affected in Azad Kashmir, according to ISPR, the military’s media wing.

“Army troops have reached earthquake-hit areas of Mirpur, Jatlan and Jarikas. Relief and rescue efforts under way,” it said in a statement.

It said that army engineer teams with equipment were employed to undertake immediate repair work on road Jatlan-Mangla and bridges at Jatlan.

“Doctors and paramedics are providing necessary medical care,” it said, adding that CMH Mangla and Jhelum were available for necessary treatment.

“Rescue effort will continue throughout the night till completion,” it concluded.

Tremors were felt as far as New Delhi, while the Press Trust of India reported that people rushed out of their homes and offices in panic in several places, including in Rajasthan, Punjab and Haryana.

Pakistan straddles part of the boundary where the Indian and Eurasian tectonic plates meet, making the country susceptible to earthquakes.

The NDMA chairman said the main road from Mangla to Jatla, along a river, suffered major damage.

Three major bridges were damaged as well as several residences, he said, adding that damage assessment would take place in the coming days.

Lt Gen Afzal said Mangla Dam was not damaged by the natural disaster.

He said NDMA officers as well as Pakistan’s armed forces including ground troops were dispatched to the affected areas.

The chairman said that over the next few days a plan will be chalked out for rehabilitation, recovery and restoration of normalcy in the affected areas.__Tribune.com