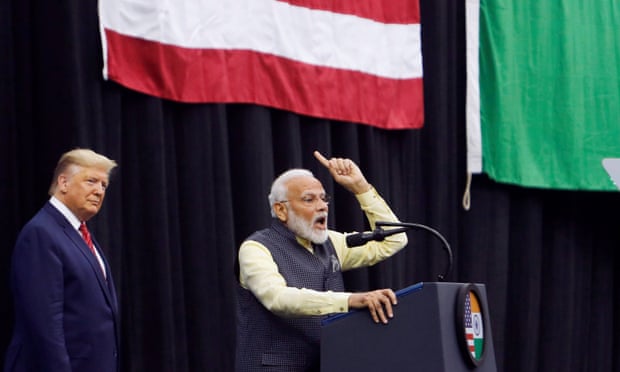 Narendra Modi defended his government’s actions in Kashmir and accused Pakistan of harbouring terrorists during a packed rally in Texas attended by the US president Donald Trump.
Trump sat in the front row as the Indian prime minister told cheering crowds his decision to remove all autonomy from Indian-administered Kashmir would bring progress and better rights for its people.
India has faced international criticism over its actions in Kashmir. Thousands of people have reportedly been detained, and access to mobile or internet services has been severed for millions of people in a communications blackout, part of a security clampdown in the wake of Delhi’s decision. Trump and Modi are the mainstream faces of the global far right
The rally, on Sunday, marked the first time Modi had discussed the decision to remove Kashmir’s special status on a world stage, and followed months of fierce rhetoric from Pakistan, which also claims the disputed region and has sought to raise the issue with the UN.
Without directly naming Pakistan, Modi accused the country of “hatred towards India” and of supporting terrorism.
“Whether it is the 9/11 attack in America or the 26/11 attack in Mumbai, where are its conspirators found?
“The time has come for a decisive fight against terrorism and those who support terrorism,” he said. “I want to stress here that President Trump is standing firmly against this.”
Trump, who was given a rapturous welcome at the event, said he was committed to protecting “innocent civilians from the threat of radical Islamic terrorism”.
About 50,000 Indian Americans attended the “Howdy Modi!” rally, where crowds chanted “Modi! Modi! Modi!” as he took to the stage, following a 90-minute cultural program featuring 400 dancers.
Trump, introduced by Modi as “my friend, a friend of India, a great American president”, was given a standing ovation at the event in Houston, a Democratic stronghold in Republican-dominated Texas. Houston is expected to be a critical battleground in Trump’s 2020 re-election bid.
Modi, who was re-elected this year with a thumping majority, enjoys wide support among Indians both at home and abroad, especially among the middle classes, said Manoj Joshi, a fellow at the Observer Research Foundation, a New Delhi-based thinktank. “He is extremely popular, particularly when it comes to the Indian diaspora in the US where there is a lot of Gujarati diaspora, from his home state,” he said.
The rally was held as Kashmir remains under a security crackdown, apparently to prevent unrest. Outside the stadium, protesters accused Modi’s government of human rights abuses against Kashmiris.
Iltija Mufti, the daughter of the former Jammu and Kashmir chief minister Mehbooba Mufti, said on Twitter: “While people in Kashmir have been gagged, mass hysteria is orchestrated elsewhere to justify this decision.” Her mother was among thousands reportedly detained as part of a crackdown by security services.
Modi’s speech came just days before the UN general assembly’s meeting in New York, where the Pakistani prime minister, Imran Khan, is expected to accuse Modi of being complicit in torture and mass detention in Indian-administered Kashmir.
Michael Kugelman, a south Asia expert at the Wilson Center, in Washington DC, said while Modi generally prefered to keep quiet about Kashmir with global audiences, it was unsurprising that he had raised the issue in Texas.
“I think he wanted to try to blunt international criticism by demonstrating just how popular the move [to remove Kashmir’s special status] was among Indians — including Indian Americans in the US,” said Kugelman. “And indeed his comment got louder applause than just about anything he or Trump said during the whole event.”
Though the scrapping of Kashmir’s special status faces major opposition within the region, it is widely supported elsewhere in India.
It was unsurprising an Indian leader would criticise Pakistan in a political speech, said Kugelman, but he added: “It is significant that Modi did so with Trump seated right in front of him, and at a moment when the US-Pakistan relationship has enjoyed a renaissance thanks to Islamabad’s help with Taliban talks in Afghanistan.”