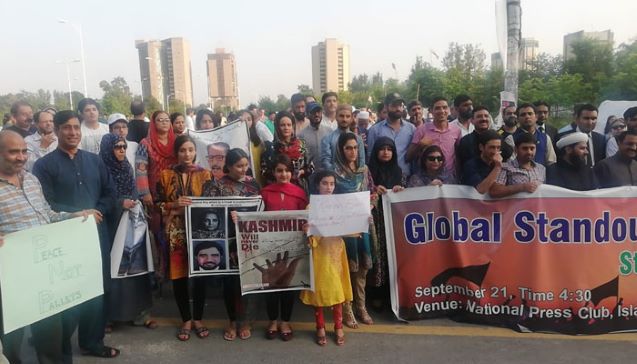 ISLAMABAD: To express solidarity with the besieged people of Indian Occupied Kashmir, a protest was organized in Islamabad under the banner of Global standout for Peace in South Asia on the eve of the UN International Day of Peace.

The peace-loving people gathered in front of Islamabad National Press Club to stand in solidarity with the Kashmiris and demand the Indian government immediately restore communication in occupied Kashmir, remove the draconian measures enforced in the name of security and order, and respect Kashmiris’ right to decide their future.

Hundreds of common people including civil society activists, journalists, poets, writers and political workers participated in the event. On the road that leads to Islamabad Press Club, it was a zealous gathering where popular feminist poet and activist Kishwar Naheed recited her two new poems on Kashmir.

Famous investigative journalist and popular anchorperson of Pakistan Hamid Mir also participated in the event. He warned that time is running fast and if Kashmiris are thrown over the edge, it will be disastrous for the region.

This event had been made possible through the sheer hard work of young activists Qaiser Khan, Fawad Aslam, Fatima Anwar and Ayesha Gardazi from Azad Jammu and Kashmir.__The News